WASHINGTON (BLOOMBERG) - Elon Musk will relinquish the role of Tesla chairman and split a US$40 million (S$54 million) penalty with the electric-car maker to settle fraud charges brought by the US over his tweeted claims about taking the company private.

Mr Musk, 47, will get to keep his job as chief executive officer but must resign as chairman within 45 days and won't be able to get re-elected for three years, the Securities and Exchange Commission (SEC) said on Saturday (Sept 29).

Neither Tesla nor Mr Musk admitted wrongdoing under the settlement, which was reached two days after the SEC sued the billionaire over tweeted claims that he had the funding and investor support to buy out stockholders at US$420 a share.

"As a result of the settlement, Elon Musk will no longer be chairman of Tesla, Tesla's board will adopt important reforms - including an obligation to oversee Musk's communications with investors - and both will pay financial penalties," Mr Steven Peikin, co-director of the SEC's Enforcement Division, said in a statement.

"The resolution is intended to prevent further market disruption and harm to Tesla's shareholders."

The settlement requires that Tesla appoint two new independent directors and establish a committee of independent board members.

The company had come under criticism for years prior to Mr Musk's take-private episode for lax governance, though shareholders sided with the board in June by voting against an independent chairman measure and approving the re-election of two directors. 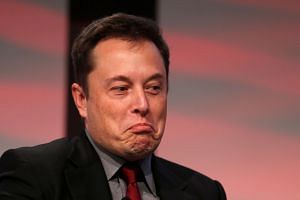 Tesla's Musk ready to fight SEC suit but could settle

"This is a good resolution for Tesla stakeholders," Mr Ben Kallo, an analyst at Robert W. Baird & Co, said in an e-mail.

"I expect the stock to trade materially higher on this and into the quarter where we can focus on the fundamentals."