WASHINGTON (AFP) - Mr Donald Trump can be heard discussing with his personal lawyer how to buy the rights to the story of a Playboy model, who says she had an affair with the now president, on a tape released on Tuesday (July 24) by CNN.

The existence of the tape, secretly recorded by his former longtime attorney Michael Cohen two months before the 2016 election, was reported last week by the New York Times, which said the FBI seized it during a raid on Mr Cohen's office this year.

Now, the recording is available for the world to listen to.

It involves Ms Karen McDougal, a former Playboy model who says she had a months-long fling with Mr Trump after they met in 2006, shortly after Mr Trump's wife Melania gave birth to their son, Barron.

In the tape, Mr Trump and Mr Cohen talk about buying the rights to Ms McDougal's story, which she had sold a month earlier to the National Enquirer for US$150,000 (S$204,499.50). The tabloid never published the story.

In the at-times muddled recording, Mr Cohen says he wants to set up a company to acquire the rights off American Media, the company that owns the Enquirer.

During the campaign, the Trump team denied any knowledge of the deal between Ms McDougal and American Media.

But in the tape, candidate Trump expresses no surprise when the issue comes up and Mr Cohen talks about essentially reimbursing the company for what it paid Ms McDougal.

"I need to open up a company for the transfer of all that info regarding our friend David," Mr Cohen says, apparently referring to Mr David Pecker, the head of American Media.

"When it comes time for the financing, which will be -," Mr Cohen says, at which point Mr Trump interrupts and says "what financing?" 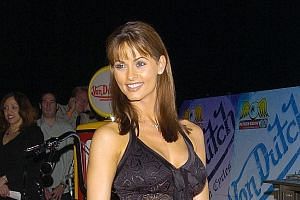 Ex-Playboy model says Trump tried to pay her for sex

Prosecutors have at least 12 recordings by Trump lawyer Cohen

"We'll have to pay -," Mr Cohen says, according to a CNN transcript of the conversation, which also addressed other business issues between the two men.

"We won't pay with cash?" Mr Trump asks, according to the CNN transcript of a segment that is particularly hard to hear.

Mr Cohen is then heard saying "no, no" and it is not clear what is said next.

The tape, made in September 2016, two months before the election, was provided to CNN by Mr Cohen's attorney, Mr Lanny Davis.

Mr Cohen, who has fallen out with Mr Trump, is under federal investigation in New York for his business dealings and reportedly whether hush payments violated campaign finance laws.