ORLANDO, FLORIDA (BLOOMBERG) - A Southwest Airlines 737 Max aircraft being flown to storage was forced to return to a Florida airport on Tuesday (March 26) after experiencing an engine problem, the carrier said.

The fault had "absolutely no relation" to the flight-control issue that prompted United States regulators to ground all 737 Max aircraft on March 13.

The crew of Southwest Flight 8701 declared an emergency and landed safely in Orlando, the Federal Aviation Administration (FAA) said in a statement.

The FAA said it is investigating the incident.

The Max aircraft was being flown to storage in Victorville, California, and only the pilots were on board, Southwest said.

Aviation officials in several countries grounded the Max after the plane's Manoeuvring Characteristics Augmentation System, or MCAS, caused a Lion Air jet to repeatedly dive on Oct 29 until pilots lost control and it crashed. 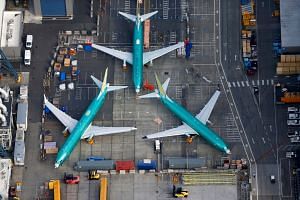 An Ethiopian Airlines 737 Max followed a similar flight path before it slammed into the ground on March 10. The two crashes killed 346 people.

A US Senate panel is scheduled to hold a hearing on Wednesday on the two disasters and federal oversight of air safety.

Boeing stocks fell less than 1 per cent to US$368.35 after the close of regular trading.

The shares dropped as much as 3.1 per cent following initial reports of the Southwest plane's emergency landing.