OAKLAND, UNITED STATES (AFP) - Lamenting that the American Dream and its democracy are under attack in Donald Trump's United States, California Senator Kamala Harris on Sunday (Jan 27) formally declared her candidacy to become the country's first black female president in 2020.

Ms Harris, who was California's attorney general from 2011 to 2017, made her announcement to supporters outside city hall in Oakland, San Francisco's grittier neighbour where she was born.

Mr Barack Obama introduced himself to Californian voters in 2007 in the same location before he was elected the first African American president of the US a year later.

Ms Harris already announced in a Jan 21 video that she would run for president. She joins a Democratic field with several other candidates seeking to keep Mr Trump out of the White House for a second term.

"We are here because the American dream and our American democracy are under attack and on the line like never before," she said.

"When democratic values are under attack around the globe, when authoritarianism is on the march, when nuclear proliferation is on the rise, when we have foreign powers infecting the White House like malware, let's speak the truth," she added to raucous applause.

Without naming the President, Ms Harris directly targeted the divisive policies of his unconventional administration. 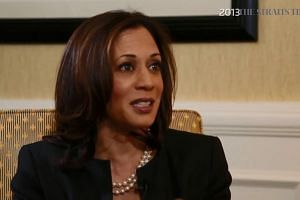 Thanks for sharing? US politicians' online tone seeks an authentic like

Ms Harris, whose father is from Jamaica and whose mother is a Tamil Indian, said that "in the face of powerful forces trying to sow hate and division among us, the truth is that as Americans, we have so much more in common than what separates us".

Mr Trump regularly tries to equate illegal immigrants with crime and gangs, and his stand-off with Democrats in Congress over funding for a wall on the Mexican border led to a record near five-week shutdown of parts of the government.

"The President's medieval vanity project is not going to stop them," Ms Harris said of transnational gangs.

She also attacked Mr Trump's failed policy that put migrant children "in cages" after separating them from their parents.

Referring to racist-inspired deadly violence in the country, Ms Harris said "that's not our America", and neither is it when "we have leaders who bully and attack a free press and undermine our democratic institutions".

Mr Trump regularly dismisses as "fake news" reports that cast him in a critical light, and has called some journalists the "enemy of the people".