WASHINGTON (REUTERS) - An international scientific team is expected on Wednesday (April 10) to unveil a landmark achievement in astrophysics - the first photo of a black hole - in a feat that will put to the test a pillar of science: Albert Einstein's theory of general relativity.

Black holes are phenomenally dense celestial entities with gravitational fields so powerful no matter or light can escape, making them extraordinarily difficult to observe despite their great mass.

News conferences are set in Washington, Brussels, Santiago, Shanghai, Taipei and Tokyo to disclose a "groundbreaking result" from the Event Horizon Telescope (EHT) project, begun in 2012 to directly observe the immediate environment of a black hole using a global network of telescopes.

A black hole's event horizon is the point of no return, beyond which anything - stars, planets, gas, dust and all forms of electromagnetic radiation - gets swallowed into oblivion.

The Washington news conference convened by the US National Science Foundation is scheduled for 9am on Wednesday (9pm Singapore time).

Among those due to speak are astrophysicist Sheperd Doeleman, director of the Event Horizon Telescope at the Harvard-Smithsonian Centre for Astrophysics. 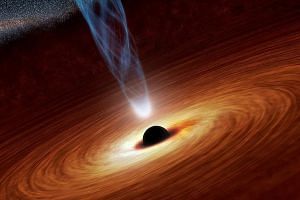 Scientists set to unveil first picture of a black hole

The research will test the theory of general relativity put forward in 1915 by Einstein, the famed theoretical physicist, to explain the laws of gravity and their relation to other natural forces.

Einstein's theory allows for a prediction of the size and shape of a black hole. If the prediction turns out to be off the mark, the theory may need rethinking.

One of the black holes - Sagittarius A* - is situated at the centre of our own Milky Way galaxy, possessing four million times the mass of our sun and located 26,000 light years from Earth.

A light year is the distance light travels in a year - 9.5 trillion km.

The second one - M87 - inhabits the centre of the neighboring Virgo A galaxy, boasting a mass 3.5 billion times that of the sun and located 54 million light-years away from Earth. Streaming away from M87 at nearly the speed of light is a humongous jet of subatomic particles.

Black holes, which come in different sizes, are formed when very massive stars collapse at the end of their life cycle.

Supermassive black holes are the largest kind, growing in mass as they devour matter and radiation and perhaps merging with other black holes.

The fact that black holes do not allow light to escape makes viewing them difficult.

The scientists will be looking for a ring of light - disrupted matter and radiation circling at tremendous speed at the edge of the event horizon - around a region of darkness representing the actual black hole. This is known as the black hole's shadow or silhouette.

The scientists said the shape of the shadow would be almost a perfect circle in Einstein's theory of general relativity, and if it turns out that it is not, there is something wrong with the theory.

The project's researchers obtained the first data in April 2017 using telescopes in the US states of Arizona and Hawaii as well as Mexico, Chile, Spain and Antarctica.