The night saw a few heated exchanges, some emotional moments, a couple of laughs - and plenty of antics from the ever-explosive Donald Trump.

Here are a few highlights, lowlights and unforgettable quotes from the night.

When asked about calling some women fat pigs, dogs, slobs or disgusting animals, Donald Trump was quick to answer, delivering a low blow to a longtime and very vocal rival.

"Only Rosie O'Donnell," he said of the actress and talkshow host, to an aghast crowd. 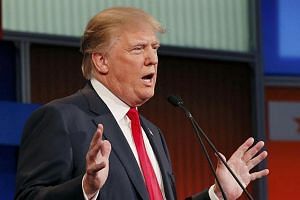 Candidates were eager to express their pro-life stance in the wake of a scandal involving a secret recording of Planned Parenthood staffers discussing abortion techniques and the sale of aborted embryos.

"It's time that we recognize the Supreme Court is not the supreme being and we change the policy to be pro-life and protect children instead of rip up their body parts and sell them like they're parts to a Buick," he said.

Governor John Kasich took a unifying stance on gay rights, telling the crowd about a recent same-sex wedding he attended.

"Because somebody doesn't think the way I do, doesn't mean I can't care about them or love them. If one of my daughters happened to be there, of course I would love them and accept them," he said.

Senator Rand Paul, however, rejected the recent decision by the Supreme Court to legalize same-sex unions, and threw in a case for his right to bear arms too.

"Look, I don't want my marriage or my guns registered in Washington," he stated.

No one was afraid to dish it out to Democratic candidate Hillary Clinton.

Ben Carson: "If Hillary is the candidate, which I doubt, that would be a dream come true... She is the epitome of the progressive, the secular progressive movement. And she counts on the fact that people are uninformed." Mike Huckabee: "It seems like this election has been a whole lot about a person who is very high in the polls, but doesn't have a clue about how to govern. A person who has been filled with scandals and who could not lead. And of course, I'm talking about Hillary Clinton."

Trump boasted that Hillary Clinton attended his wedding, ostensibly as payback for a donation he made to the Clinton family foundation, but he made it clear he regrets the philanthropy.

"I said 'be at me wedding' and she came to my wedding. She had no choice because I gave to a foundation and frankly that foundation is supposed to do good. I didn't know her money would be used on private jets going all over the world. It was," he said.

Governor Chris Christie and Senator Rand Paul exchanged heated words about the National Security Agency's post-September 11 data collection program, with Paul accusing his rival of cozying up to Obama instead of criticizing the spying scheme.

"You fundamentally misunderstood the bill of rights. I'm talking about searches without warrants... that's what I fought to end. I don't trust President Obama with our records. I know you gave him a big hug and if you want to give him a big hug again, go right ahead," said Paul.

Christie clawed right back: "You know the hugs that I remember are the hugs that I gave to the families who lost their people on September 11th... those had nothing to do with politics."

Trump, who has made waves with his controversial comments about Mexican immigrants, dove back in - but softened his stance slightly.

"We need to build a wall, and it has to be built quickly. And I don't mind having a big beautiful door in that wall so that people can come into this country legally," he said.

"Knowing what we know now, with faulty intelligence and not having security be the first priority when we invaded, it was a mistake. I wouldn't have gone in," he said.

Trump told us what we already knew, admitting that he's not known for his meek opinions.

"I think the big problem this country has is being politically correct. I've been challenged by so many people and I don't frankly have time for total political correctness," he said.