SACRAMENTO, California (REUTERS) - Uncontrolled wildfires driven by high winds and unprecedented temperatures raged across the US West on Tuesday (Sept 8), incinerating the Washington town of Malden and threatening communities in Oregon and California.

Firefighters and emergency responders searched on Tuesday for residents of tiny Malden, about 480 km east of Seattle, a day after a firestorm destroyed 80 per cent of its homes, along with the fire station, post office, city hall and library.

"The scale of this disaster really can't be expressed in words," said Brett Myers, sheriff of Whitman County, where the town of between 200 and 300 people is located. "I pray everyone got out in time."

The fire that destroyed Malden erupted about noon on Sunday (Sept 6), driven by winds of 65 kilometres per hour, Myers told Reuters.

Authorities went door-to-door ordering evacuations before the blaze arrived. The fire engulfed most of the town over the course of about three hours.

That fire was one of dozens of large blazes burning in Washington, Oregon and California over the Labor Day holiday weekend, as the thermometer soared. Temperatures in the western part of Los Angeles' San Fernando Valley topped 49 degrees Celsius.

"I have no patience for climate change deniers," California Governor Gavin Newsom said, pointing to the high temperatures, as well as years of drought that have killed millions of trees, providing fuel for fires. "It simply is completely inconsistent ... with the reality on the ground."

About 14,000 firefighters battled 25 blazes in California with more than 2.2 million acres (890,308 hectares) charred since the fire season got an early - and deadly - start last month, a record for this point in the year, the California Department of Forestry and Fire Protection (CalFire) said on Tuesday. The state's peak fire season has yet to begin.

Fires forced thousands of residents to evacuate their homes and closed several national forests across the state. 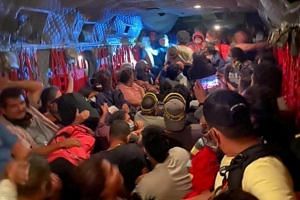 Smoke darkened the skies and made breathing difficult as far north as Canada and well down the coast toward Southern California. In the state capital of Sacramento, the skies were gray and it was difficult to breathe, as high winds carried in dust and smoke from numerous fires.

Air throughout much of the Sacramento and San Joaquin Valleys, the state's agricultural breadbasket, was rated "hazardous" by the state.

The Creek Fire in the Fresno area of central California, which caused the weekend emergency evacuation of more than 200 people vacationing at a popular reservoir, grew overnight under what CalFire on Tuesday called "extreme conditions". The blaze, which started on Sept 4, threatened the community of Shaver Lake, among others, fuelled in part by trees weakened by drought and killed by the invasive bark beetle, the fire agency said.

At a news conference on Tuesday, Newsom praised the firefighters who led a helicopter evacuation of the area, saying they saved 214 people in smoky conditions that made it difficult to see.

"They very easily could have turned around and said the smoke made that mission too dangerous," Newsom said, calling the rescuers heroic. Rescue efforts continued on Tuesday, he said, with about 165 people airlifted to safety and escape routes sought for more than a dozen more.

By Tuesday morning, the fire was completely uncontained and had burned 144,000 acres (58,275 hectares), CalFire said.

Firefighters on the ground were also in peril.

Wildfires rage in California as heat wave lingers across US West

Fifteen firefighters fighting another blaze in the Los Padres National Forest were forced to take cover in their personal fire shelters, which is "considered a life-saving measure and a last resort", said Chris Barth, a spokesman for the Pacific Northwest Team Two fire command. Three were seriously injured, one critically.

Pacific Gas & Electric (PG&E) shut off power to thousands of residents in 22 counties in California to prevent sparks from its equipment from setting off more fires.

A fire in San Bernardino County, southeast of Los Angeles, that officials said was caused by a pyrotechnic device used during a gender reveal party, had burned nearly 11,000 acres by Tuesday morning and was 16 per cent contained, CalFire said.

Newsom on Sunday declared a state of emergency in Fresno, Madera, Mariposa, San Bernardino and San Diego counties due to the wildfires.