WASHINGTON (WASHINGTON POST) - President Donald Trump said on Wednesday (June 26) that if the United States goes to war with Iran, the conflict "would not last very long" and would not involve ground troops.

Mr Trump reiterated his desire to avoid war during a wide-ranging interview on Fox Business.

"I'm not talking boots on the ground," Mr Trump added. "I'm not talking, we're going to send a million soldiers. I'm just saying if something would happen, it wouldn't last very long."

Mr Trump also pointed to his decision last week to call off a military strike that was to have been launched after Iran shot down a US drone.

His comments come amid increasing tensions between the two countries and personal insults between Mr Trump and Iranian leaders. 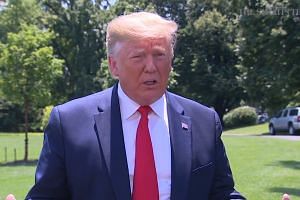 No ‘boots on the ground’ in Iran dispute, Trump says; cites ‘unlimited time’ for new deal

Any attack on "anything American", tweeted the president, will bring "overwhelming" US force and "obliteration" of some Iranian assets.

During Wednesday's interview, Mr Trump said he does not think that the Iranian leadership is smart.

"I don't think they have smart leadership at all," he said. "Iran's going down the tubes."