WASHINGTON (WASHINGTON POST) - US President Donald Trump early last year directed his then-chief of staff, General John Kelly, to give presidential son-in-law Jared Kushner a top-secret security clearance - a move that made Gen Kelly so uncomfortable that he documented the request in writing, according to current and former administration officials.

After Mr Kushner, a senior White House adviser, and his wife, Ms Ivanka Trump, pressured the President to grant Mr Kushner the long-delayed clearance, Mr Trump instructed Gen Kelly to fix the problem, according to a person familiar with Gen Kelly's account, who spoke on the condition of anonymity to describe internal discussions.

Gen Kelly told colleagues that the decision to give Mr Kushner top-secret clearance was not supported by career intelligence officials, and he memorialised Mr Trump's request in an internal memo, according to two people familiar with the memo and the then-chief of staff's concerns.

It is unclear how Gen Kelly responded to Mr Trump's directive. But by May, Mr Kushner had been granted a permanent security clearance to view top-secret material - a move that followed months of concern inside the White House about his inability to secure such access.

Mr Kushner's lawyer publicly described the process as one that had gone through normal channels, a description that Gen Kelly did not view as accurate, according to a person familiar with his reaction.

The former chief of staff, who left the administration at the beginning of this year, did not immediately respond to a request for comment.

Mr Peter Mirijanian, a spokesman for Kushner lawyer Abbe Lowell, said in a statement that "in 2018, White House and security clearance officials affirmed that Mr Kushner's security clearance was handled in the regular process with no pressure from anyone".

"That was conveyed to the media at the time, and new stories, if accurate, do not change what was affirmed at the time," he added.

House Intelligence Committee Chairman Adam Schiff, a California Democrat, said in a statement late on Thursday that his panel, as well as the House Oversight Committee, will continue their investigation of the White House's security clearance process. 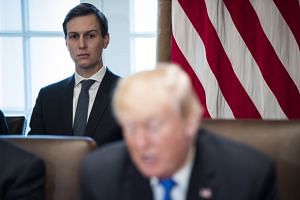 "The revelation that President Trump personally intervened to overrule White House security officials and the Intelligence Community to grant a Top Secret security clearance to his son-in-law, Jared Kushner, is the latest indicator of the President's utter disregard for our national security and for the men and women who sacrifice so much every day to keep us safe," Mr Schiff said.

"There is no nepotism exception for background investigations."

Both Mr Trump and his daughter, Ivanka, have publicly denied the President was involved in securing a clearance for Mr Kushner.

The President told the New York Times in a Jan 31 interview that he did not direct Gen Kelly or similar officials to grant a clearance for his son-in-law, and Ms Ivanka Trump similarly told ABC News earlier this month that her father was not involved in the process.

In the first year of the administration, Mr Kushner held an interim security clearance that allowed him to view both top-secret and sensitive compartmented information, which is classified intelligence related to sensitive sources.

With that designation, he has been able to attend classified briefings, get access to the President's daily intelligence report and issue requests for information to the intelligence community.

But there was widespread concern in the White House about his lack of a permanent clearance.

In February 2018, Gen Kelly limited the access of employees with interim security clearances to top-secret information in the wake of abuse allegations against a top aide.

That new policy caused Mr Kushner's clearance to be downgraded from "Top Secret/SCI" level to the "Secret" level, a far lower level of access to classified information.

At the time, Mr Trump said he would defer the question of Mr Kushner's access to his chief of staff.

"I will let General Kelly make that decision, and he's going to do what's right for the country," the President said during a news conference. "And I have no doubt that he will make the right decision."

Mr Lowell said at the time that Kushner's "application was properly submitted, reviewed by numerous career officials and underwent the normal process".

Mr Kushner did not receive a clearance to see the most highly classified intelligence the government produces, known as sensitive, compartmented information, or SCI, The Washington Post reported last July.

That meant that Mr Kushner was effectively barred from seeing information gleaned from human spies or from the government's vast signals intelligence apparatus.

It's that kind of intelligence that forms the basis of the President's daily intelligence briefing and that is customarily given to senior policymakers and Cabinet officials.

Mr Kushner's lack of SCI access suggests that the CIA has not signed off on his receiving that level of intelligence, security experts said.

He had struggled to obtain even his top-secret clearance, in part because of his contacts with certain foreign government officials, The Post previously reported.

Some foreign officials, whose communications were intercepted by the US intelligence, privately discussed how they could manipulate Mr Kushner, taking advantage of his complex business arrangements, financial difficulties he had at the time and his lack of foreign policy experience, according to current and former US officials familiar with intelligence reports on the matter, who spoke on the condition of anonymity because of the sensitivity of the subject.

Mr Kushner's foreign entanglements caused anxiety among US intelligence officials who are ultimately responsible for deciding whether he should have SCI clearances, that step above top secret, according to US officials with knowledge of internal deliberations.

The decision to grant an SCI clearance is usually made by the agency that generated the information.