The Republican billionaire-turned-world leader signalled that he is seriously considering retired Marine Corps general James "Mad Dog" Mattis to be his Pentagon chief, heaping praise on him.

When asked before dinner at his Trump National Golf Club in New Jersey if he would soon reveal new nominations, Mr Trump told reporters "Pretty true", confirming he had "made a couple of deals".

It was not clear if he planned to make any announcements late Sunday local time (Monday Nov 21, Singapore time), either from Bedminster or once he makes the 90-minute drive back to Trump Tower in Manhattan.

The President-elect was clearly seeking to sound out people from a wide range of backgrounds, from party stalwarts to business moguls to former rivals.

Some of Mr Trump's choices for other key posts so far - attorney general, national security adviser and chief White House strategist - have come under fire on civil rights grounds from Democrats and other critics. 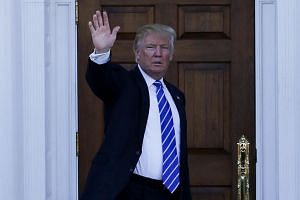 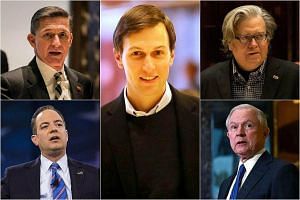 But he has also moved to mend fences with moderate Republicans as he goes about building a new administration before his Jan 20 inauguration.

On Saturday, he interviewed one-time foe Mitt Romney - the 2012 Republican presidential candidate who called him a "fraud" during the recent campaign - for the secretary of state position reportedly coveted by Mr Giuliani.

Mr Trump, 70, was clearly wowed by Gen Mattis, who led the US Central Command from 2010-2013, overseeing the US withdrawal from Iraq and a surge in Afghanistan.

He called the 66-year-old "the real deal" after their meeting on Saturday.

A colourful combat commander and voracious reader, Gen Mattis has been quoted as saying, "Be polite, be professional, but have a plan to kill everyone you meet."

Retired general Jack Keane told NPR that he had declined an offer to serve as Pentagon chief, citing personal reasons. He said he had recommended Gen Mattis and retired general David Petraeus, a former CIA chief.

Mr Christie, who threw his support to Mr Trump after his own bid for the Republican presidential nomination fizzled, appeared back in favour after being pushed out as transition chief.

His choice of Mr Steve Bannon, seen as an ideologue of the ultra-conservative alt-right movement, as chief strategist has also drawn fire.

Mr Trump and Vice President-elect Mike Pence began their day attending a Sunday service at a Presbyterian church in the New Jersey countryside. 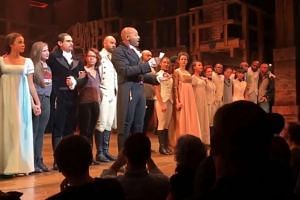 But the early-rising Trump was on Twitter before that, attacking the cast of hit Broadway musical "Hamilton" as rude, and Saturday Night Live, the late-night satirical show that mercilessly lampoons him, as offering "nothing funny at all".

Mr Pence was booed at a performance of "Hamilton" on Friday and one of the lead actors read out an appeal for the new administration to "work on behalf of all of us".

"The cast and producers of Hamilton, which I hear is highly overrated, should immediately apologise to Mike Pence for their terrible behavior," Mr Trump wrote early Sunday, in his third tweet on the subject.

Mr Pence said Sunday on Fox News that he was not offended, in fact urging people to see the musical.