For several months, prosecutors from the US attorney's office in Manhattan have been looking into whether Mr Cohen broke the law in any of his various business dealings - among them, a US$130,000 (S$177,429.20) payment he made to Ms Clifford in the run-up to the 2016 election that was meant to keep her quiet about an extramarital affair the adult film actress claims she had with Mr Trump.

Ms Clifford has been cooperating with the prosecutors, including providing them with documents about the payment, in response to a subpoena, a person familiar with the case said.

But the interview on Monday would have given prosecutors their first opportunity to ask Ms Clifford detailed questions about the arrangement, which Mr Trump initially denied but then acknowledged in a startling turnabout last month.

It was unclear exactly what Ms Clifford had planned to tell the prosecutors. But legal experts have said that if the payment to her was intended to influence the presidential race by suppressing an explosive news story that could have damaged Mr Trump's election chances, it could be covered by federal campaign finance laws. 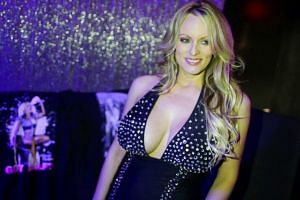 Donald Trump confirms his lawyer was reimbursed after US$130,000 payment to Stormy Daniels

This month, Mr Avenatti filed a lawsuit against Ms Clifford's former lawyer, Mr Keith Davidson, accusing him of colluding with Mr Cohen to quash the story about her alleged affair with the President, calling Mr Davidson "a puppet" for Mr Cohen and Mr Trump.

Ms Clifford may be able to tell prosecutors whether the Trump campaign was ever specifically mentioned as Mr Davidson and Mr Cohen hashed out the details of the hush-money payment.

Lawyers for Mr Cohen and Mr James Margolin, a spokesman for the federal prosecutors' office, also declined to comment on the meeting.

The Cohen investigation had been occurring in secret, as prosecutors went so far as to covertly read his e-mails.

But it burst into the public eye in April when federal agents armed with search warrants conducted a series of early-morning raids on Mr Cohen's office, apartment and hotel room.