WASHINGTON (AFP) - US Secretary of State Mike Pompeo said Monday (June 3) that the United States has lost hope for human rights progress in China in the 30 years since the Tiananmen Square crackdown, as he urged the release of political prisoners and Uighur Muslims.

In a statement marking the anniversary of the June 4 assault on the pro-democracy uprising, Pompeo hailed the "heroic protest movement" which he said still stirred "the conscience of freedom-loving people around the world."

"Over the decades that followed, the United States hoped that China's integration into the international system would lead to a more open, tolerant society. Those hopes have been dashed," Pompeo said.

"Today, Chinese citizens have been subjected to a new wave of abuses, especially in Xinjiang, where the Communist Party leadership is methodically attempting to strangle Uighur culture and stamp out the Islamic faith," he said.

An estimated one million Uighurs have been placed in detention in Xinjiang, a massive incarceration that China describes as vocational training to reduce radicalism.

Hundreds, and by some estimates more than 1,000, unarmed civilians were killed when troops and tanks were ordered to crush the uprising in the heart of Beijing.

"We urge the Chinese government to make a full, public accounting of those killed or missing to give comfort to the many victims of this dark chapter of history," Pompeo said, calling on China to "release all those held for seeking to exercise" fundamental rights and freedoms. 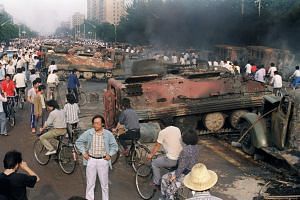 China bounces back, 30 years after Tiananmen

US President Donald Trump's administration has taken a hard line on China including through an accelerating trade row.

Trump has frequently accused China of stealing US technology and otherwise cheating in the commercial sphere, despite Beijing's integration into the global economy that was backed by the United States in the decade following the Tiananmen crackdown.

The Trump administration has raised human rights repeatedly with China, although it often treads much more lightly when addressing rights issues in US-allied countries.