ABOARD US GOVERNMENT AIRCRAFT (REUTERS) - US Secretary of State Mike Pompeo on Sunday (Aug 5) played down an exchange of contentious remarks with North Korea on the sidelines of weekend regional meetings in Singapore, saying Pyongyang had made clear its continued commitment to denuclearise.

Both Pompeo and North Korean Foreign Minster Ri Yong Ho were in Singapore, less than two months after an unprecedented summit between US President Donald Trump and North Korean leader Kim Jong Un that Trump has hailed as a success despite a lack of concrete action by Pyongyang to abandon its nuclear weapons programme.

Pompeo and Ri's interaction nevertheless appeared limited to a brief handshake at the Asean Regional Forum.

When Pompeo left the meeting on Saturday, Ri delivered an address in which he said Pyongyang was alarmed by US intentions.

He also complained about US calls to maintain sanctions on North Korea and reluctance to declare a formal end to the Korean War.

Pompeo was asked in a briefing to reporters travelling back with him to Washington whether he was concerned by Ri's remarks. He noted the tone of the North Korean statement was far different that it was last year.

"The minister made very clear of their continued commitment to denuclearise," Pompeo said.

"I probably don't have his words exactly right, but it's pretty close. Compare the anger, frankly, over years and years, and hatred, as spewed by the North Koreans; his comments were different." Pompeo stressed the US "mission statement" remained clear.

"The UN Security Council has said they must end their nuclear program and their ballistic missile programme. He has to deliver on the commitments he's made," he said, referring to North Korean leader Kim Jong Un.

At the June 12 summit, Kim committed in broad terms to work towards denuclearisation of the Korean peninsula but North Korea has offered no details on how it might go about this. US officials, including Pompeo, have said North Korea has continued to work on its weapons programmes.

Ri said North Korea was committed to implementing a joint statement by Kim and Trump at their summit "in a responsible and good-faith manner".

But he reiterated a call for a phased approach to talks, which differs from the US insistence that North Korea give up its weapons before relief from sanctions. 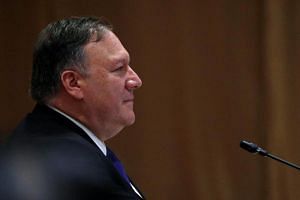 Asked whether North Korea could be offered concessions other than sanctions relief, Pompeo replied: "I am not going to comment on the sanctions and what others may have proffered."

Asked why he had apparently not held a formal meeting with Ri in Singapore, Pompeo, who has been leading US negotiating efforts with Pyongyang, replied: "Your question has a predicate and I'm just going to say, there are lots of conversations taking place."

According to the State Department, in their brief exchange on Saturday Pompeo told Ri: "We should talk again soon", to which Ri responded: "I agree, there are many productive conversations to be had."

Ri's later comments were not the first since the summit in which that North Korea has appeared to offer a more negative impression of the progress of talks with the United States shortly after Pompeo has departed from a meeting.

Following a trip to Pyongyang in July, Pompeo spoke of progress, but as soon as he had left the country North Korea accused the United States of "gangster-like" diplomacy, casting doubts about the future of the discussions.