WASHINGTON (NYTIMES) - A day after President Donald Trump accepted an invitation to meet Kim Jong Un of North Korea, the White House on Friday (March 9) began planning a high-level diplomatic encounter so risky and seemingly far-fetched that some of Trump's aides believe it will never happen.

The administration is already deliberating over the logistics and location of the meeting, with a senior State Department diplomat noting that the most obvious venue is the Peace House, a conference building in the Demilitarised Zone between North and South Korea.

But several officials on Friday said that the United States still needed to establish direct contact with North Korea to verify the message from Kim that was conveyed by South Korean envoys to Trump on Thursday. They warned that Kim could change his mind or break the promises he had made about halting nuclear and missile tests during talks.

"The United States has made zero concessions, but North Korea has made some promises," said the White House press secretary, Sarah Huckabee Sanders. "This meeting won't take place without concrete actions that match the promises that have been made by North Korea."

The White House later clarified that Sanders was not adding preconditions to the meeting but merely emphasising the consequences if Kim conducted tests or interfered with joint military exercises between the United States and South Korea scheduled to begin at the end of March.

On Friday night, Trump reiterated on Twitter that "the deal with North Korea is very much in the making" and that it would be, "if completed, a very good one for the World." "Time and place to be determined," he said.

The White House's muddled message highlighted the confusion sowed by Trump's on-the-spot decision to meet Kim. Having built its North Korea policy on sanctions and threats of military action, the administration must now learn the language of engagement.

It also served as a reminder of how many hurdles lie ahead before Trump's spontaneous decision on Thursday afternoon leads to a meticulously staged meeting between the US president and the dictator who rules the world's most reclusive country.

"North Korean offers typically come with caveats and asterisks that need to be examined," said Daniel R. Russel, a former Asia adviser to President Barack Obama. "We all hope that the multiyear pressure campaign has had an effect, but we shouldn't prematurely celebrate."

At the State Department, where some diplomats quietly applauded Trump's gamble, there was a fear that more hawkish aides in the White House might throw up further hurdles to the meeting. The White House, they said, has invested more in sanctions and military options than in diplomacy. Officials there have in the past expressed frustration about what they viewed as the Pentagon's reluctance to provide options for a military strike on the North.

With all the potential traps and internal misgivings, some officials said they believed the chances of a meeting between the two leaders actually happening were less than 50 per cent.

Trump's decision stunned allies and his own advisers, not least Secretary of State Rex Tillerson, who was caught unaware while travelling in Africa when the president accepted Kim's invitation.

Tillerson's lack of involvement in the announcement underscored how marginalised the State Department has become in North Korean policy. The department's chief negotiator on North Korea, Joseph Yun, resigned from the Foreign Service last week.

Other State Department officials insisted that Tillerson had not been singled out; Trump blindsided all his advisers. And the secretary, speaking to reporters in Djibouti, argued that Trump's decision was not the bolt from the blue that it seemed.

"This is something that he's had on his mind for quite some time, so it was not a surprise in any way," Tillerson said. "He's expressed it openly before about his willingness to meet with Kim Jong Un."

Sanders said the president was in a "great mood" after two momentous days in which he had announced sweeping tariffs on steel and aluminium - fulfilling a cherished campaign promise - and had scrambled the equation on his most pressing foreign policy challenge. 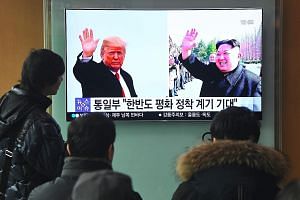 Trump hails progress as he accepts Kim's offer of talks 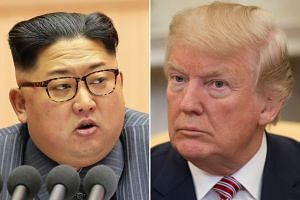 Privately, however, Trump sounded muted rather than buoyant, according to a person familiar with a round of calls he made Thursday evening to solicit feedback about his surprise move.

While the president told people he liked the concept of a once-in-a-lifetime breakthrough, the person said, he struck a less boisterous note than he usually does publicly when he places a bet on himself.

But in the past 24 hours, the president has told confidants that he feels vindicated by his decision to accept the invitation for a meeting, suggesting his approach has led to a potential new path.

Some advisers in the room with Trump and the South Korean envoys - including Defence Secretary Jim Mattis and the national security adviser, Lt. Gen. H.R. McMaster - expressed concerns about a meeting, according to a senior official. But nobody vocally opposed it.

Trump also had to mollify a rattled ally, Japan, which got no advance notice of his decision. In a call, he reassured Prime Minister Shinzo Abe that the United States would not ease its pressure campaign on North Korea. Abe, officials said, asked for a meeting with him.

Trump's call Friday morning with President Xi Jinping of China was more relaxed. The Chinese have long called for direct talks between the United States and North Korea. US officials said they expected that Xi would offer Beijing as a venue for the meeting.

The location is one of a number of unresolved issues, including the size and composition of the delegations, and the agenda. Some officials said Trump and Kim would set a broad framework for the talks and leave the actual negotiating to subsequent sessions with lower-level officials. Even the logistical issues might require a couple of preliminary meetings, they said.

Still, the lack of direct communication between Pyongyang and Washington was a yellow light to some experts. The two countries communicate through independent channels, one of which - the "New York Channel" - goes through North Korea's mission to the United Nations.

In recent months, these channels have been used mostly for communications about Americans detained in North Korea. Yun, the former State Department negotiator, used such a channel to negotiate the return of Otto Warmbier, the college student from Cincinnati who suffered an irreversible brain injury while held in prison in Pyongyang.

At some point, officials said, they expected North Korea to send a message about the Trump-Kim meeting through one of the channels. The administration will parse it to assess if it aligns with the message brought to Washington by the South Korean envoys.

South Korea's president, Moon Jae In, has tried tirelessly to broker a meeting between US and North Korean officials. He sent his envoys - Chung Eui-yong, the national security adviser; and Suh Hoon, the director of the intelligence service - to the White House almost immediately after they returned from their meeting with Kim in Pyongyang.

The message from the envoys, US officials said, was that the economic sanctions had really crippled the North. Kim, one official said, referred to North Korea as a poor country.

"This was the most forward-leaning report that we've have had in terms of Kim Jong Un's - not just willingness - but his strong desire for talks," Tillerson said. "What changed was his posture in a fairly dramatic way that, in all honesty, came as a little bit of a surprise to us."