WASHINGTON (AFP) - The United States announced on Friday (March 20) it has successfully tested an unarmed prototype of a hypersonic missile, a nuclear-capable weapon that could accelerate the arms race between superpowers.

The Pentagon said a test glide vehicle flew at hypersonic speeds - more than five times the speed of sound, or Mach 5 - to a designated impact point.

The test followed the first joint US Army and Navy flight experiment in October 2017, when the prototype missile demonstrated it could glide in the direction of a target at hypersonic speed.

"Today, we validated our design and are now ready to move to the next phase towards fielding a hypersonic strike capability," Vice-Admiral Johnny Wolfe said in a statement.

Hypersonic weapons can take missile warfare, particularly nuclear warfare, to a new - and, for many, frightening - level.

They can travel much faster than current nuclear-capable ballistic and cruise missiles at low altitudes, can switch direction in flight and do not follow a predictable arc like conventional missiles, making them much harder to track and intercept.

Even as conventionally armed, non-nuclear weapons, they are viewed by analysts as raising the danger of conflict, because an adversary might not know how they are armed when launched.

The Pentagon is pressing to catch up with rivals Moscow and Beijing in the race to develop hypersonics, even as it recognises they could dangerously raise the risks of a nuclear conflict, as countries struggle to build defences against them.

In its fiscal 2021 budget, the US Defence Department requested US$3.2 billion (S$4.6 billion) for hypersonic programmes, up from US$2.6 billion in the current year. The goal is a deployable hypersonic capability by 2023, though that could be difficult.

"Delivering hypersonic weapons is one of the department's highest technical research and engineering priorities," the Pentagon said.

The joint Army-Navy test was carried out on March 19 from the Pacific Missile Range facility in Kauai, Hawaii. The test was for the military's common-hypersonic glide body, or C-HGB weapon, designed to be launched from a rocket that could be land-, air- or sea-based. 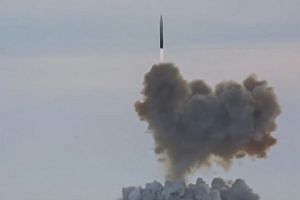 In December, Russia declared it had placed into service its first Avangard hypersonic missile, making it the first country to claim an operable hypersonic weapon.

Russian officials claimed that in tests it had reached speeds of up to Mach 27, roughly 33,000kmh.

China is also investing significantly in their development. Last October, it displayed its DF-17 hypersonic glide vehicle in its national day military parade.

The US military is meanwhile pouring money into advanced missile defence research to find ways to protect against hypersonics.

A senior Nato official warned that in a hypersonic missile strike, it may not even be clear what the target is "until there's a boom on the ground."

In January the Bulletin of Atomic Scientists advanced its "Doomsday Clock," its assessment of the risk of nuclear holocaust, in part due to the rising threat of hypersonic weapons.

"There is increasing investment in and deployment of hypersonic weapons that will severely limit response times available to targeted nations and create a dangerous degree of ambiguity and uncertainty," it said.

"This uncertainty could lead to rapid escalation of military conflicts. At a minimum, these weapons are highly destabilising and presage a new arms race."