SAN FRANCISCO (AFP) - Terra Thomas, one of the millions of Americans who have lost their income due to the coronavirus pandemic, was stuck between a rock and a hard place - pay her rent or put food on the table?

"Looking at my finances, it was, 'do I give the last little bit of my money to my landlord - who has a billion-dollar corporation - or do I save this for necessities like food and healthcare?'" said Ms Thomas, who lives in Oakland in the San Francisco Bay area.

She is participating in a "rent strike" with four other residents in her building, a growing movement across the United States among people who face the same dilemma.

She works as a freelance florist for events, particularly weddings, so her income depends completely on the resumption of group activities. Refusing to pay her US$833 (S$1,180) rent "feels like a pretty common sense decision. It feels like a matter of survival", she told AFP.

Over the past month, a staggering 22 million Americans have lost their jobs as stores, restaurants and other businesses deemed non-essential were forced to close, shedding legions of workers.

The shutdown of all this non-essential activity, an attempt to slow the spread of Covid-19, has had serious consequences in a country where many people struggle with debt and lack a financial safety net.

In 2018, 40 per cent of Americans said they had less than US$400 saved for emergencies, without selling belongings or borrowing, according to a report by the Federal Reserve.

Some small-scale landlords have proposed repaying rent via instalments. Several cities and states, including California, have passed executive orders prohibiting eviction of tenants affected by the coronavirus crisis.

But when the lockdown lifts, the moratorium will end. And tenants will have to pay their back rent or move out.

"We can't have people accumulating debts during this time so when this is all over, they might end up on the street. They're working to pay off debts as opposed to getting their life back together and up and running," said Ms Hillary Ronen, a San Francisco district supervisor.

"It's going to stall the economy. It makes no sense at all." 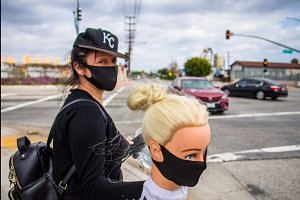 With other local elected officials, she called on the governor of California, Gavin Newsom, on Congress and on President Donald Trump to cancel rents and extend mortgage payments for landlords.

Washington's plan to jumpstart the US economy includes checks of about US$1,200 or more for many Americans, particularly lower-income and middle-class households.

But the cheques often won't be enough to cover fixed expenses, particularly in cities with high rent.

"We need either a mass infusion of cash directly to renters, or we need cancellation of rents during the period of stay-at-home order. If we do not have one of those two things, we will have a mass eviction crisis where individuals and families will end up homeless on the streets of this country, in huge large numbers," she said.

About 2,000 people have pledged not to pay their next month's rent to the Alliance of Californians for Community Empowerment, which provides legal aid to rent strikers as one of several organisations overseeing the movement. It is not known how many people are taking part overall.

He acted as main spokesman for everybody in the seven occupied units of his building, who initially agreed to join the rent strike.

"Everybody said 'yeah let's do it,' but then they got scared and backed out. In April, half of them paid the whole thing, most of the other paid part of it," he said.

Mr Zepeda is legally blind, his wife lost her job at a food packing plant and his 22-year-old daughter, who also lives at home, says her hours were cut to one day a week at the cheque cashing place where she works.

So what Mr Zepeda did pay for the April rent came from his disability cheque.

He said he does not know what he will do in May. "We are in survival mode right now," he said.

"For a rent strike to work you need millions people doing it. It doesn't work unless a good portion of us do it," said Mr Frederick Joseph, a New Yorker who founded his own marketing firm.

He issued an appeal for donations to help families struggling to buy even the basics of everyday life, and since the beginning of the crisis he has collected and distributed US$170,000.

He, too, called on governments to pass laws forgiving back rent, insisting people will never be able to come up with that money anyway.

"People will try to find a way to pay it. Some might start criminal activity, people who feel they have to keep a roof over their head," said Mr Joseph.

"It's in their best interest that elected officials step up right now."

14 suspected adverse events linked to vaccine boosters out of over 230,000 shots

If I am unvaccinated, how can I still enter shopping malls if I need to?