GUATEMALA CITY (REUTERS) - The first foreign asylum-seeker arrived in Guatemala on Thursday (Nov 21) from El Paso, Texas, under a US agreement that establishes it as a so-called safe third country to process people fleeing persecution in their homelands.

The programme, similar to European ones that push asylum seekers to Turkey, is a policy achievement for US President Donald Trump.

He has made cracking down on immigration a central plank of his 2020 re-election campaign.

Democrats and activists say it is irresponsible to send vulnerable people to seek shelter in Guatemala, with its high murder rates, tiny asylum system and weak rule of law.

Guatemalan Interior Minister Enrique Degenhart said his government would process anybody who wanted to apply for asylum, but noted that United Nations immigration and asylum agencies would be responsible for providing shelter during their stay.

Degenhart previously told Reuters he expected some of the returnees would go home to El Salvador and Honduras.

The UN International Organisation for Migration (IOM) said this week the United States had provided it with US$10 million (S$13 million) to help migrants voluntarily return from Guatemala to their homelands.

"The (Honduran asylum-seeker) who arrived requires shelter and we're working with organizations to offer this help," IOM spokeswoman Melissa Vega said in an interview.

She described the assistance, which also includes food and medical care, as a humanitarian effort aimed at helping migrants who lack the means to return home. 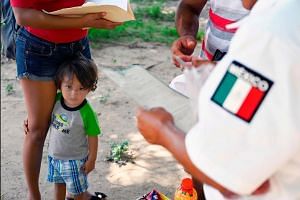 US ending aid to El Salvador, Guatemala, Honduras over migrants

Degenhart said more flights carrying foreign asylum-seekers were expected next week, but that the United States had not said how many would be returned.

The new effort began after the US government brokered an agreement with Guatemala in July. The deal allows US immigration officials to make migrants requesting asylum at the US-Mexican border apply for asylum in Guatemala first.

The Trump administration has worked to restrict asylum access in the United States to curb the number of mostly Central American families arriving at the US-Mexico border.

US officials this week said the programme initially would be applied in El Paso. A first phase will target adults from Honduras and El Salvador and the aim will be to process them within 72 hours, according to the officials.

Critics contend asylum seekers face danger in Guatemala, where the murder rate is five times that of the United States, according to 2017 data compiled by the World Bank.

Refugees International, an advocacy organisation, has said Trump is "outsourcing" asylum to a country from which more than 100,000 fled to seek US asylum last year.

"The countries in Central America aren't safe to return refugees to," said Yael Schacher, an advocate with Refugees International, in an interview.

"Those are refugee-producing countries and they aren't able to receive refugees right now, they don't have the capacity to process asylum seekers."

Guatemalan President-elect Alejandro Giammattei, who takes office in January, has said he will review the agreement.