LOS ANGELES (AFP) - A student armed with a handgun killed another student in a “confrontation” at an Arizona university early Friday that also left three others with multiple gunshot wounds, police said, in the latest shooting at a US college.

The deadly incident at Northern Arizona University (NAU) came hours before President Barack Obama was to meet families of victims of last week’s shooting rampage at Umpqua Community College in Oregon that left nine people dead before the gunman killed himself.

The first emergency calls came through to police at 1.20am Friday, when most NAU students would have been in bed at the sprawling university campus in the city of Flagstaff.

“We have one student deceased and three others being treated at the Flagstaff medical centre.”

The alleged shooter, named by police as 18-year-old freshman Steven Jones, was taken into custody and did not attempt to escape arrest.

All the victims were male students. 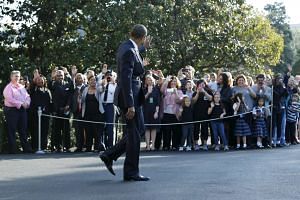 One killed, one wounded in shooting near Texas Southern University

It was not immediately clear what the confrontation was about, but Jones was cooperating with police, Fowler said.

NAU spokeswoman Cindy Brown told CNN that the incident occurred in a parking lot next to a residence hall on campus, which is a designated “gun-free” zone with 20,000 students.

Students described how they were awoken by a university text message warning them of the shooting or by calls from worried friends and family.

“You don’t expect that in Flagstaff. I never thought it would happen here,” one student, Megan Aardahl, told CNN, describing how her room was just yards from where the shooting took place.

“And we’ve been texting each other in group chats and making sure everyone is safe,” she said.

“There is a huge community here and everyone is reaching out and making sure everyone’s okay.”

“This is not going to be a normal day at NAU. Our hearts are heavy,” she added.

‘PRAYING FOR THE VICTIMS'

“But of course this is a very upsetting thing for anyone to receive in the middle of the night. Honestly, our thoughts are with the families of the victims right now.”

Arizona Governor Doug Ducey called the incident – which comes amid a renewed national debate about gun control after a series of school shootings – “heartbreaking.”

“I join Arizonans from all across our state in praying for the victims of this morning’s tragic shooting, their families and the entire Northern Arizona University community,” he said.

In the wake of the Umpqua killings, Obama angrily called on Congress to do more and warned that failure to act on gun control was a “political decision,” vowing to keep pushing for reform.

However, Obama faces a frosty reception on Friday from some in the grieving community of conservative Roseburg, home to the Umpqua college.

The father of one girl who was shot in the back and survived by playing dead told Fox News he had declined an invitation to meet the President, accusing him of politicising the tragedy.