The Shasta County Carr Fire grew by about 60 per cent overnight, scorching 18,000 hectares, state fire officials said. It was just 3 per cent contained as crews battled it for a fifth day.

A curtain of smoke and flames loomed over low-slung buildings in Redding, home to 90,000 people, with forecasts calling for wind gusts of 40kmh and temperatures of 43 deg C.

“When you’re dealing with temperatures that high, it’s really, really hot heat,” said Cal Fire spokesman Scott Kenney in a phone interview. “Stress, as far as heat exhaustion and heat stroke, are really serious situations that a firefighter can get into, so the tactics kind of get hindered by temperatures that high.”

The Carr Fire is one of 88 burning nationally, mostly across the American west, one of which prompted the closure of much of Yosemite National Park.

This year so far, almost 1.6 million hectares have been blackened by wildfires, above a 10-year average of 1.5 million hectares over the same period, according to the National Interagency Fire Centre.

Roads out of Redding, about 240km north of Sacramento, were jammed overnight with motorists trying to escape the flames, social media postings showed. Interstate 5, which runs from the Mexico border to Canada, runs near the city.

The blaze killed two firefighters, one of whom had been using a bulldozer to clear plants to stop its spread.

One of the city’s hospitals, Mercy Medical Center, said it had treated eight people in its emergency room, including three firefighters for injuries related to the blaze.

“Wildfires happen every year in California,” said Rick Plummer, a spokesman for Mercy Medical Centre. “This one seems to be a bit different when it’s actually in town and burning up residential developments.”

The blaze has so far destroyed 65 buildings and damaged another 55, officials said. Nearly 5,000 more were in danger.

Two residents who chose not to leave were 61-year-old Rob Wright and his wife, who planned to fight off flames with a high-powered water hose. 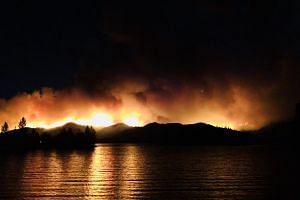 Thousands told to flee ‘out of control’ California wildfire

“We were fortunate enough that the wind changed about hours ago and it is pushing the fire back,” said Wright at about 1.15am local time. “We are just waiting it out... crossing our fingers and hoping for the best.”

A Red Cross employee told local ABC affiliate KRCR there were some 500 people in the evacuation center at Shasta College.

“We’re just going to chill out and sleep and pray that we’ve got a place to go home to,” area resident Joey Silva told the Sacramento Bee as he waited in the Shasta College parking lot.

More than 3,000 customers had lost power in the area, according to utility PG&E.

Two other major fires are also burning in the state.

Two weeks ago, a firefighter died fighting the Ferguson Fire east of San Francisco when a bulldozer overturned. Seven other firefighters were hurt.