CONCORD, NEW HAMPSHIRE (REUTERS) - Democrats scrambled to gain an edge with voters on Saturday (Feb 8) on the last weekend before the party's next presidential nominating contest in New Hampshire, where Pete Buttigieg began drawing fire as the candidate on the rise.

The 38-year-old former mayor of South Bend, Indiana, is enjoying a boost after coming out of Monday’s Iowa caucuses tied with US Senator Bernie Sanders. Both men claimed victory, while Senator Elizabeth Warren followed in third place and former Vice President Joe Biden trailed in fourth.

As polls showed Buttigieg gaining ground in New Hampshire, Biden, in particular, zeroed in on him, apparently viewing him as the most direct threat to his candidacy.

Throughout the day, Biden, 77, sought to compare his 45-year career in public office with the 38-year-old Buttigieg, whose only political position has been the mayor of South Bend, a town of 100,000.

“He’s a good guy,” Biden said at a campaign event in Manchester. “He’s a great mayor. But guess what? He was a mayor.”

The candidate who ultimately secures the Democratic nomination will face President Donald Trump, a Republican, in the November general election.

After what has been a mostly affable Democratic campaign, Biden’s team pulled off the gloves and targeted Buttigieg with a withering digital ad that pits Biden’s decades of experience in public life against that of the two-term mayor.

The video makes liberal use of popular former President Barack Obama in a belittling rundown of some of the city-level issues Buttigieg faced as mayor and also takes a swipe at his troubled record with African Americans.

The ad, which will run on Facebook and YouTube in New Hampshire, extols Biden's work on the assault weapons ban, while noting that Buttigieg forced out the city's black police chief.

"We're electing a president. What you've done matters," the ad says in closing.

At a widely attended Democratic Party event in Manchester on Saturday, Buttigieg fired back with an implicit rebuke of Biden’s criticisms.

“I know some of you are asking: What business does the South Bend mayor have seeking the highest office in the land?” he said, noting that he has no Washington experience.

But, he argued, that is why he is best positioned to take on Trump. Residents of small cities like his, he said, are “tired of being reduced to a punchline by Washington politicians.”

Biden finished a distant fourth in Iowa and all but conceded he would lose New Hampshire in the first moments of a Democratic debate on Friday night.

For months, people close to the Biden campaign had said going negative would be harmful to his political brand, which is built around empathy and optimism.

But his poor finish in Iowa seems to have altered that calculus. In New Hampshire, he has been much more critical of his rivals by name. The Buttigieg ad marks a significant escalation that likely carries some risk of blowback.

At a campaign event in Manchester, New Hampshire, Biden began to re-frame himself as an underdog.

"I've never paid attention to all this front-runner talk since I entered the race." 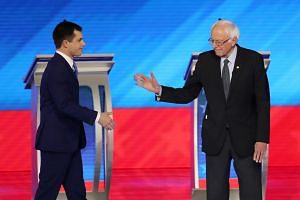 Iowa victors Sanders and Buttigieg are targets in Democratic debate

He listed various political and personal setbacks on his life. "I know nothing comes easy."

In line with the ad, he made light of Buttigieg’s tenure as mayor of South Bend, saying there was a difference between managing the budget of a small city and his own work marshaling the US$900 billion Recovery Act economic stimulus package through Congress after the 2008-2009 recession

Of Sanders, Biden said for all his time in Congress, Sanders had made no progress in getting his Medicare for All plan passed. "He hasn't been able to move the ball a single inch."

Billionaire Democratic candidate Michael Bloomberg, who campaigned in Oklahoma City on Saturday, racked up another endorsement, this one from US Representative Haley Stevens, one of 31 Democrats who represent congressional districts that Trump won in 2016.

Another of those Democrats, former Navy helicopter pilot Mikie Sherrill, endorsed Bloomberg on Thursday, followed by former Navy Secretary Richard Spencer on Friday, making him the first high-level former Trump administration official to back a Democratic hopeful in the 2020 election.

In Manchester, Elizabeth Warren held a rally for nearly 800 volunteers before they went door-to-door on a frigid afternoon.

“There’s still a lot of folks out there who are really starting to get worried – worried that this fight against Donald Trump might not be winnable,” she said. “You know, the way I look at this, I’ve been winning unwinnable fights pretty much all my life.”

Warren then set out to do some door-knocking of her own, along with her husband Bruce, their golden retriever Bailey, and a media entourage.

At the first stop, a woman named Jean opened the door and screamed in surprise. “Oh my goodness!” she said, holding an infant in her arms. “I’m voting for you!” Even in that moment, however, there was a reminder that Warren is in a tough battle for New Hampshire votes. A man driving by saw the scene and yelled out his window, “Go Bernie!” and peeled away.

The latest Suffolk University tracking poll of New Hampshire Democratic voters shows Buttigieg with 25 per cent to Sanders' 24 per cent, within the 4.4 point margin of error and showing a clear split between the moderate from Indiana and the party's progressive standard-bearer from neighbouring Vermont.

In the two-day tracking poll of 500 likely Democratic primary voters, Buttigieg has risen 14 points since the first poll was published Feb 3.

Warren, Sanders' fellow liberal from next-door Massachusetts, was third with 14 per cent and Biden finished fourth with 11 per cent, the poll showed. The other candidates were in single digits with 7 per cent of voters undecided.

A CNN poll conducted by the University of New Hampshire Survey Centre showed Sanders still holding a lead but with Buttigieg swiftly gaining on him.