YOUNGSTOWN, Ohio (WASHINGTON POST) - An Ohio man who tried to discipline his 6-year-old daughter by chasing her around in a clown mask has been charged after the little girl ran screaming to a stranger's apartment - prompting that neighbour to fire a gunshot into the air, police say.

The incident occurred just before 10 pm Saturday (Sept 16), when 25-year-old Vernon Barrett Jr donned a clown mask and began chasing his young daughter outside their apartment in Boardman Township, a suburb of Youngstown, Ohio.

It was supposed to be a prank, Barrett later told police, a way to get the child to behave without resorting to spanking. A police report did not specify why he was trying to discipline his daughter that day.

Instead, the frightened child ran to a female stranger's car nearby, jumped inside and said she was being chased by a clown, police said. That woman later told police that the man wearing the clown mask pulled the child out of her car. Unsure of what was happening, the woman called 911.

("I don't want to be named," the witness told The Washington Post on Monday when reached by phone, "but I can tell you it scared the bejeezus out of me.")

In the time it took officers to arrive, the child ran into the adjacent apartment of 48-year-old Dion Santiago, declared she was scared and asked whether she could stay there because a clown was chasing her, according to a police report.

"Santiago turned off the lights and looked out his apartment window and observed Barrett standing outside of the building with a clown mask on," responding officer Joseph O'Grady wrote in his incident report. " . . . (Santiago) grabbed his firearm and fired a shot out of his window". 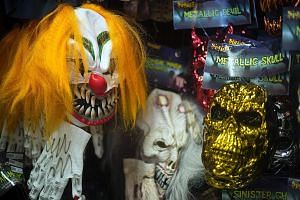 When officers responded to the scene, Santiago and Barrett were yelling at each other - the former still standing at his window and the latter still wearing a clown mask - and the girl remained too afraid to come out, police said. The child was identified in the incident report only by her initials.

"I attempted to tell JB that it was OK and that it was her father," O'Grady wrote. "However, JB ran into the back bedroom of the apartment." She eventually emerged after a woman in Santiago's apartment escorted her out, police said.

O'Grady wrote that he had to physically separate Barrett and Santiago and call for backup because the two neighbours were getting into a heated argument, with Barrett insisting that Santiago had fired his gun at him.

Barrett was charged with child endangerment and inducing panic; Santiago was charged with using weapons while intoxicated, police said. Both were released and are scheduled to appear in court Tuesday.

The child was placed in the custody of Barrett's girlfriend while Barrett was detained, police said.

Barrett told officers that his daughter's mother was in prison for child endangerment after she had stepped on the child and broken several of her ribs, according to the incident report.

"Barrett said due to this he cannot discipline his daughter and reported they have been having behaviour problems with J.B. at school and home," the report stated. "Barrett said that he decided to use the clown mask into scaring her to behave" but that the "prank" got out of hand.

Santiago, meanwhile, defended his actions to police, saying he was with his family when the 6-year-old burst into their apartment and startled them.

"Santiago's son (redacted) spoke to officers and provided a written statement and said due to the news and Internet coverage of people dressed as clowns chasing people he got nervous and scared when he looked outside the window and saw a man with a clown mask on," the police report stated.

Around this time last year, several creepy clown sightings were reported nationwide, sending some communities into panic and even prompting a school to shut down. Though most of the reports turned out to be hoaxes, the supposed sightings - and copycat pranks - prompted law-enforcement agencies to issue stern statements about clowns in general.

Eileen Kennedy-Moore, a psychologist who has written several books on parenting and child development, told The Post that it wasn't surprising that the child in Ohio wouldn't have been able to process that the man chasing her in the clown mask was her father.

"Especially when we're really frightened, we're not able to think clearly. We're not able to process new information. We're not able to understand someone else's perspective," Kennedy-Moore said. "A 6-year-old's ability to distinguish between fantasy and reality is a little shaky. For instance, it's common for a 6-year-old to tell the teacher that mommy's having a baby but she's not - but the kid really wishes she were."

The fact that it was a clown chasing the girl probably exacerbated the situation, the psychologist added."There's something very creepy about clowns to children, because the faces don't move and the features are kind of exaggerated," Kennedy-Moore said.

Clowns aside, Kennedy-Moore advises against deliberately scaring children - even though adults, in anger, can often be tempted to convince children of their "badness", she said.

"Children learn not through suffering but by doing it right," Kennedy-Moore said. "A lot of parents feel bewildered and helpless in terms of helping their kids to learn how to behave. In general, we want to be a source of safety rather than fear for our kids."