WASHINGTON (REUTERS) - President-elect Donald Trump is in for a quick wake-up call and will have to adjust his temperament when he confronts the realities of his new job on Jan 20, President Barack Obama said on Monday (Nov 14).

In a news conference at the White House, Mr Obama said the freewheeling Trump could not be as outspoken as he was during the long and bitter campaign that ended last week with the Republican’s surprise win over Democrat Hillary Clinton.

Subdued and carefully choosing his words, Mr Obama gave what appeared to be dispassionate advice to his successor free of much of the partisan rancor that marked the election campaign.

“This office has a way of waking you up,” Mr Obama said. “Those aspects of his positions or predispositions that don’t match up with reality, he will find shaken up pretty quick because reality has a way of asserting itself.”

The two men met in the Oval Office last week to begin the transition of power.

Mr Obama said on Monday he believed Mr Trump would be pragmatic in office and not approach the country’s problems from an ideological perspective.

“There are going to be certain elements of his temperament that will not serve him well, unless he recognizes them and corrects them,” Mr Obama said. “Because when you’re a candidate and you say something that is inaccurate or controversial it has less impact than it does when you’re president of the United States. Everybody around the world is paying attention. Markets move,” he said.

But Mr Obama, who criticised Mr Trump’s temperament during the campaign, said it was important for Mr Trump to send signals of unity after the hard-fought campaign. He said the political gifts that allowed the Republican to upset Mrs Clinton would be put to good use in the White House.

“I’ve been encouraged by his statements on election night about the need for unity, his interest in being president for all people,”  Mr Obama said. “In an election like this that was so hotly contested and so divided, gestures matter.”

The president-elect, a businessman who has never held public office, and his transition team are working on picking members of his Cabinet and the heads of federal agencies.

Former New York City Mayor Rudy Giuliani has emerged as a leading candidate for secretary of state, a source familiar with the process said. Mr John Bolton, a former US ambassador to the United Nations, is also being considered for the job of the nation’s top diplomat, the source added.

Mr Giuliani became one of Mr Trump’s closest advisers during the campaign, functioning as his most vocal defender on cable news programs and introducing him at many rallies.  Mr Giuliani has also been mentioned as a possible attorney general or homeland security secretary.

Meantime, a Trump transition team official denied media reports on Monday that Mr Trump was seeking security clearance for three of his children and his son-in-law.

Such clearance would allow Mr Trump to discuss matters of national security with his daughter Ivanka, sons Eric and  Donald Jr. and son-in-law Jared Kushner. Federal law prohibits him from hiring family members to serve in his administration, but all four played key advisory roles through the campaign.

Mr Trump has insisted that to avoid conflicts of interest, his children would run his sprawling business operations once he assumed the presidency. 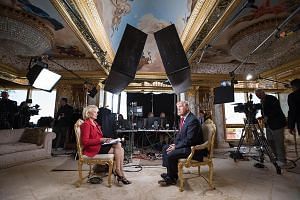 Democrats, civil rights groups and even some Republicans slammed Mr Trump for choosing  Mr Bannon as a key aide, saying it would elevate the white nationalist movement into the top levels of the White House.

Making his first appointments since last week’s upset win, Mr Trump picked Mr Bannon as his chief strategist and counselor, and Washington insider Reince Priebus as his chief of staff on Sunday, saying the two would share the task of steering his administration as “equal partners.”

The choice of Mr Priebus was seen as a conciliatory signal of Mr Trump’s willingness to work with Congress. But critics blasted the selection of Mr Bannon, who spearheaded a shift of the Breitbart News website into a forum for the “alt-right,” a loose online group of neo-Nazis, white supremacists and anti-Semites.

“There should be no sugarcoating the truth here: Donald  Trump just invited a white nationalist into the highest reaches of the government,” said Democratic Senator Jeff Merkley, who called on Mr Trump to rescind the choice.

The Democratic leader in the House of Representatives, Nancy Pelosi, said Mr Bannon’s appointment sent “an alarming signal that President-elect Trump remains committed to the hateful and divisive vision that defined his campaign.”

Even some conservatives and Republicans voiced dismay on Mr Bannon. Mr Evan McMullin, who ran as a conservative independent presidential candidate, wondered on Twitter if any national Republican leaders would condemn the pick of “anti-Semite” Bannon.

Mr Priebus defended Mr Bannon on Monday, calling him a wise and well-educated former naval officer and saying he had not encountered the sort of extremist or racist views that critics are assailing.

“He was a force for good on the campaign,” Mr Priebus said on Fox News, adding they were in agreement on “almost everything”in terms of advising the president-elect.

Ms Kellyanne Conway, Mr Trump’s former campaign manager and a senior adviser, told reporters in New York she was offended by the reaction to Mr Bannon, describing him as a “brilliant tactician.”

Police in New York on Monday were investigating two cases involving swastikas drawn or painted in public spaces, as civil rights activists said there had been a surge in hate crimes following last week’s election.

Local media reported hundreds of students walked out of a high school to protest Mr Trump on Monday in Silver Spring, Maryland, and students gathered at the University of Washington in Seattle to protest against him.