WASHINGTON (AFP) - Donald Trump said Saturday he felt “energised” in his campaign a day after calling off a giant rally amid chaotic scenes of violence, as the Republican faced scrutiny over the racially-charged tone of his White House bid.

Democratic frontrunner Hillary Clinton issued a stern warning to Trump after tensions boiled over in Chicago, just days before a crucial new round of presidential nomination votes on Tuesday.

“If you play with matches, you’re going to start a fire you can’t control. That’s not leadership,” she said. “That’s political arson.”

President Barack Obama added his voice to the chorus criticism of Trump’s incendiary rhetoric against immigrants and Muslims, which many blame for fanning the tensions around his campaign.

“What the folks who are running for office should be focused on is how we can make it even better – not insults and schoolyard taunts and manufacturing facts, not divisiveness along the lines of race and faith, certainly not violence against other Americans,” the President said.

Friday’s violence flared after throngs of protesters – many of them blacks and Latinos angered by Trump’s incendiary anti-immigrant rhetoric – massed outside and inside the venue in Chicago, in a tense standoff with the candidate’s own supporters.

As the meeting was called off, several fistfights broke out. The chaos ended within a few hours, but not before members of the crowd threw bottles at officers, and several tried to take the stage and speak at the podium. 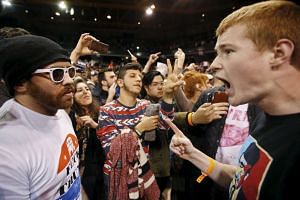 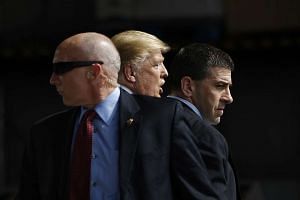 Trump has placed the blame for Friday’s disturbances – which briefly triggered scenes reminiscent of the civil unrest of the 1960s – squarely on protesters he described as “thugs”.

Calling himself “energised” by the opposition to his campaign, the businessman forged ahead Saturday with two huge meetings in the heartland state of Ohio, despite fears of fresh standoffs between his supporters and opponents.

Trump’s first rally of the day, at an airplane hangar in Dayton, Ohio, passed off without major disturbance – until the very end when a protester jumped on stage towards Trump, before the Secret Service intervened.

Addressing supporters in Dayton, Trump said the Chicago skirmishes were due to a “planned attack” by organised agitators against his supporters – whom he praised as “nice folks.”

“These are people like yourselves. These were people that want to make America great again,” he said.

“All of a sudden, a planned attack just came out of nowhere.”

In tweet first thing Saturday morning, Trump said: “The organised group of people, many of them thugs, who shut down our First Amendment rights in Chicago, have totally energised America!”

Critics, however, have accused Trump of fuelling the toxic atmosphere – with inflammatory language on the stump that has ginned up taunts – and even violence – against demonstrators.

When protesters interrupted a rally in Iowa last month, he encouraged supporters to “knock the crap out of them,” while in Las Vegas when a protester disrupted his speech the billionaire said he would like to “punch him in the face.”

Many are also raising broader concerns about the impact of the Republican’s divisive campaign the future of his party, fearing it could even damage the fabric of American society.

Trump’s three remaining rivals for the nomination, Rubio, Kasich and Texas Senator Ted Cruz – seizing a chance to bring the frontrunner down a notch – were unanimous in their condemnation.

“Forget about the election for a moment,” Rubio told a press conference in Florida.

“There’s a broader issue in our country and this is what happens when a leading presidential candidate goes around feeding into a narrative of anger and bitterness and frustration.”

Until recently, most of Trump’s campaign appearances had been in majority white towns and cities dominated by disenfranchised and disaffected white voters who make up the bulk of his supporters.

That was not the case late on Friday in Chicago, a minority-white city with a population that is about 33 per cent black and 29 per cent Hispanic, according to the most recent census data.

The city is also one of a handful which has been roiled by protests amid allegations of deadly police violence towards African-Americans, and is a stronghold of the “Black Lives Matter” protest movement.

The movement’s activists appear to have been among the hundreds who rallied to counter Trump on Friday.

The sudden security concerns mark a major test for Trump as he seeks to lock up the nomination.

Many in the party see next Tuesday’s votes as the last best chance to derail the insurgent candidacy of the mogul, who has so far won 15 of 24 primary races.