WASHINGTON (REUTERS) - Nikki Haley announced on Tuesday she is resigning as the US ambassador to the United Nations, but the rising Republican star immediately denied she was preparing to challenge President Donald Trump in the 2020 presidential election.

Sitting beside Trump in the Oval Office, Haley said her 18-month stint at the United Nations had been “an honour of a lifetime” and said she would stay on until the end of the year.

A former governor of South Carolina who is the daughter of Indian immigrants, Haley is the highest profile woman in Trump’s Cabinet and is often seen as a possible presidential candidate.

But she said in her resignation letter to Trump she would “surely not be a candidate for any office in 2020” and would support his re-election bid.

She told reporters in the Oval Office on Tuesday: “No, I am not running for 2020.”

Haley said she did not have any future plans set and did not give a reason for her unexpected departure, but Trump said she had told him some six months ago that she was thinking of leaving by the end the year “to take a little time off.”

Haley’s fast rise from a Southern state’s legislature to the world stage suggests the 46-year-old may have greater political ambition.

Describing her UN tenure as “fantastic” and “incredible,” Trump was effusive in his praise for Haley. He accepted her resignation and said he would name her successor within two or three weeks.

Trump later told reporters he would consider selecting former Goldman Sachs executive and White House adviser Dina Powell to replace Haley, and shot down speculation he would put his daughter Ivanka in the role.

Haley has been the face of Trump’s “America First” policy at the United Nations, steering the US withdrawal from several UN programmes and ardently defending his hard-line policies against Iran and North Korea over their nuclear programs.

But Haley has also sometimes distanced herself from Trump.

Haley’s name has come up as possible Republican running mate in the last two presidential elections and she could also become a US senator if fellow South Carolina Republican Lindsey Graham takes up a job in the Trump administration, as is often speculated.

Trump suggested the two of them jointly announce Haley’s departure in the Oval Office, an administration official said, noting that Haley was the only outgoing senior member of Trump’s administration to be feted in this way.

Returning the favour, Haley praised Trump and his family for their support. 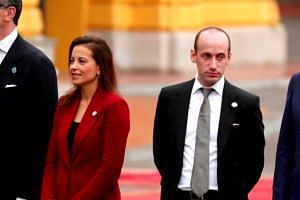 She described Jared Kushner, Trump’s son-in-law and aide, as “such a hidden genius that no one understands” for his work on renegotiating the Nafta trade deal and preparing a long-awaited Middle East peace plan that has not yet been released.

The feel-good nature of her resignation was markedly different from other departures from the Trump Cabinet. Trump unceremoniously announced his firing of former secretary of state Rex Tillerson in March in a tweet.

Haley was seen by her counterparts at the United Nations as a voice of clarity in a US administration that often gave off mixed signals on foreign policy, diplomats say.

But she has been overshadowed in recent months by the appointments of Trump loyalist Mike Pompeo as secretary of state and hawk John Bolton as White House national security adviser.

Pompeo has led policy on talks with North Korea, while Bolton has taken the lead on trying to implement Trump’s hard line against Iran.

“I am deeply concerned about the leadership vacuum she leaves and the national security impact of her departure at this time of continued disarray,” Menendez said in a statement.

Haley is the latest in a long line of high-profile departures from the administration, such as that of Tillerson and Steve Bannon, Trump’s chief strategist, who left in August 2017.

A convert to Christianity in her 20s after being raised a Sikh, Haley is popular with religious conservatives in the South.

Her status as a potential candidate for national high office was boosted in 2015 when she ordered the Confederate battle flag to be pulled down at South Carolina’s state capitol grounds after a white supremacist gunman shot dead nine black worshipers at a church in Charleston.

Haley has also applauded women who come forward to denounce sexual abuse or misconduct by men and said they should be heard, even if they are accusing Trump.

Haley has long taken a tougher public stance on Russia than Trump, who has sought better relations with President Vladimir Putin.

Haley raised eyebrows within the administration when she announced in April that Washington was going to impose sanctions on Moscow over its support of Syria’s government. Trump then decided not to go ahead with the move.

Haley fought against what she called anti-Israel bias at the United Nations, and sometimes seemed to be channelling Trump’s abrasive style of diplomacy.

Last year, she upset US allies and foes alike by warning that the United States would be “taking names” of countries that backed a UN resolution criticising Trump’s decision to recognise Jerusalem as Israel’s capital.

Echoing previous statements from Trump, Haley said on Tuesday that the United States under his presidency is now respected around the world.

“Now the United States is respected. Countries may not like what we do, but they respect what we do. They know that if we say we’re going to do something, we follow it through,” she said.