A New York-based food blogger was caught lying about her race times during the Fort Lauderdale A1A Half Marathon on Feb 19 - thanks to a sharp-eyed race analyst.

Ms Jane Seo, 24, ended up getting disqualified after Mr Derek Murphy - who specialises in exposing marathon cheats - discovered an incriminating photo which showed that the distance she covered did not tally with the race's 13.1 miles (21km).

Ms Seo, a 2014 Harvard graduate who has written for websites such as Huffington Post and Buzzfeed, had finished second in the half-marathon.

A post-race photo of her showing off her medal and wearing a Garmin GPS watch, however, proved to be her undoing.

Mr Murphy, who zoomed in to scrutinise the watch, found that Ms Seo had only covered 11.65 miles in a time of 1hr 22mins 7secs.

Analysing Ms Seo's pace on his blog Marathon Investigation, Mr Murphy said the results showed she had been running at a faster speed for the last 11km of the race, at a stage when most runners begin to slow down.

Ms Seo later apologised in an Instagram post, admitting that she had cut the course as she "wasn't feeling well".

"Even worse, not only did I steal the award from the true, well-deserved runners/finishers, but also proceeded to BIKE the course afterward with my GPS watch to cover my wrong doings. What an idiot I was!" she wrote.

While Mr Murphy said he was glad Ms Seo eventually admitted to cutting the course and trying to cover her tracks, he noted that she only posted her apology after learning of the extent of the evidence against her.

"She had the opportunity to come clean after crossing the finish line. Instead, she doubled down with the deceit. She approached race officials and other runners defending her time,' Mr Murphy wrote on his blog.

"They did not approach her. She proactively went to them. She did attend the awards ceremony to collect her 2nd place award."

In a Facebook post on Feb 23, the race organisers addressed the incident and said they had forgiven Ms Seo after receiving a personal apology from her.

"She is hurting. She accepts the consequences, and I finally got her to laugh after a few minutes. Life is about second chances. I have moved on, and suggest the same for everyone," the post added. 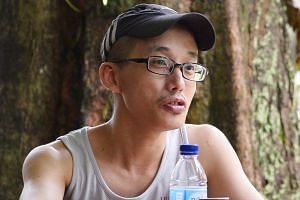 Social media users were quick to credit the keen analysis of Mr Murphy, a 46-year-old business analyst who started his marathon investigation blog in mid-2015.

In an interview with NBC News in January this year, Mr Murphy estimates that he has caught up to 250 marathon runners who tried to pull a fast one.

His sleuthing involves a combination of analysing race data and finish-line photos, as well as relying on anonymous tip-offs and an algorithm.

Those who cheat, according to Mr Murphy, generally fall into two categories - course-cutters and those who swap bibs with a faster runner.

"I think most people aren't aware of how much cheating goes on in marathons," he explained.