WASHINGTON (BLOOMBERG)- Democratic presidential candidates made their closing arguments to voters in New Hampshire on Tuesday (Feb 11) as a national poll showed a reshaped race with Bernie Sanders opening a 10-point lead over Joe Biden.

Sanders is favoured to win in the state, though he is closely trailed by Pete Buttigieg and Amy Klobuchar, who has recently surged into third place. But with 40 per cent of voters undecided in recent days, the result is far from certain.

Biden, the longtime national front-runner, announced that he was leaving New Hampshire for South Carolina on Tuesday before the polls even closed, as he tried to play down the significance of an expected fourth or even fifth place finish in the Granite State.

New Hampshire "is just the beginning", Biden said in Manchester, echoing remarks he made in Iowa a week ago.

Biden glossed over that he's also stopping in New York for a pair of high-dollar fundraisers in between South Carolina Tuesday and Nevada on Friday.

Biden's campaign announced his New Hampshire departure around 11am, when voters still had eight hours or more to cast ballots. It said he would address New Hampshire supporters via livestream. Later, he dismissed reporters' questions about whether his change of plans sent the wrong message.

"It says I'm going to South Carolina. That's what it says," he said.

Elizabeth Warren, who is tied with Biden for fourth place in some state polls, had a different interpretation.

"I think it says that he's not here to fight for the voters in New Hampshire," she told reporters in Nashua.

Sanders, who greeted voters at a polling place, crowed that he expected to do "really, really well" in Tuesday's vote. 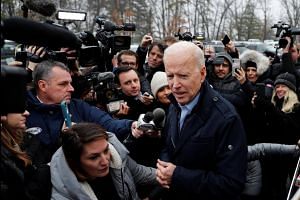 "I'm not going to speculate. All I can say is we have worked very hard, our volunteers have done an extraordinary job," he said. "I hope very much that we're going to win here."

At stake in New Hampshire are 24 delegates to the Democratic National Convention, a small prize compared to Super Tuesday on March 3, when 14 states and territories, including California and Texas, vote. But it holds outsize importance because it is the first primary election of the 2020 nominating contests.

Based on absentee ballots turned in so far, New Hampshire Secretary of State Bill Gardner has forecast a total of 420,000 voters, which would set a record for the most votes in a primary featuring an incumbent running for re-election. Still, that's below his initial estimate of 500,000 voters.

By comparison, when Barack Obama was running for re-election in 2012, a total of 311,311 voters turned out.

The survey showed Sanders ahead with 26 per cent of Democrats and Democratic-leaning voters nationally. Biden is in second place with 16 per cent. Buttigieg and Warren are tied with 13 per cent, and Michael Bloomberg has 11 per cent.

The poll suggests Buttigieg got a significant lift from his top showing in Iowa, up 7 percentage points in just a month. At the same time, Biden's support cratered, dropping a whopping 14 points. The margin of error is 5.2 percentage points.

The Monmouth poll backed up the findings about Sanders in a Quinnipiac University national survey released Monday. That poll showed Bloomberg in third.

In New Hampshire, Sanders leads with 28.7 per cent in the RealClearPolitics average of New Hampshire polls, followed by Buttigieg at 21.3 per cent and Klobuchar at 11.7 per cent. Warren and Biden are tied for fourth with 11 per cent. None of the other candidates are in the double digits.

Biden is banking on a better showing in South Carolina, where he has strong support among African American voters, who form a majority of the state's Democratic electorate. He is also hoping his backing among Latinos will propel him in Nevada.

But that firewall may not be as solid as it once was. The Quinnipiac poll showed Biden's support among black voters plummeting from 49 per cent in a Jan 28 survey to 27 per cent in the latest poll, a drop of 22 percentage points.

Bloomberg's 11 per cent showing means he needs only one more qualifying national poll showing him with at least 10 per cent support to be allowed to participate in next week's Democratic debate in Las Vegas, Nevada.

Guide to the Democratic candidates

The Democratic National Committee, as long planned, recently eliminated a requirement that candidates raise money from a certain number of supporters to get on the debate stage, a rule which disqualified Bloomberg from debates because he's self-financing his campaign.

"Iowa has had a significant impact on the race, especially for Biden, whose support was always soft and based largely on the perception of electability," he said.

The national picture is likely to change again after Tuesday's New Hampshire primary.

"There is still time for a number of candidates, including Sanders, to build or lose momentum," Murray said.