Behind yellow police tape, FBI agents and police dogs inspected the Rahami family restaurant on Monday local time (Sept 19) where the 28-year-old suspect had worked in the New Jersey town of Elizabeth.

Locals knew First American Fried Chicken and its blue awning well but little about Rahami, who was discreet and "not on the radar of local law enforcement," said Mayor Chris Bollwage.

The FBI was counting on its interrogation to determine if and how Rahami was able to build without raising suspicion bombs that wounded 29 people in Manhattan's Chelsea neighbourhood late Saturday.

He was reportedly charged with attempting to murder police officers during a shootout in Linden before being arrested.

Rahami was in hospital on Monday night, shot in the leg during the shootout with New Jersey police that saw him captured alive - images beamed across the nation of a bearded man wearing a T-shirt, his bloodied arm wrapped in a bandage as he was loaded into an ambulance while handcuffed to a stretcher. 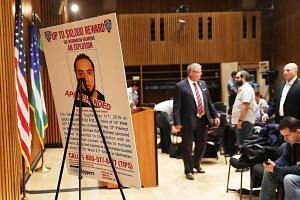 But the man who led US police on a frenetic manhunt over the weekend left no strong impression on his neighbourhood, a mostly Hispanic area where many do not speak English and filled with one-story homes.

The Rahami family was one of only a handful in that immediate zone known to be Muslim. The Rahami children attended the nearby public school.

Many of the neighbours, caught off guard by the brazen attacks, refused to speak to the media.

Neighbours spoke more at length about Mr Mohammad Rahami, the father, who owned the family restaurant where his sons worked, as well as the adjoining brick home.

A local police source said the elder Rahami was present when police came to the house early on Monday.

That's the last known address of the younger Rahami, according to local media. The family had lived there since 2002, when it opened the restaurant.

"The guy from the bombing - I haven't seen him in a while," said a man in his 20s who works at a nearby dry cleaners and asked to remain anonymous.

"Everybody in the neighbourhood knew the dad. He's very rude, very much to himself. You would just buy food and leave."

A 41-year-old man who lives just steps away and would give his name only as Miguel recalled stopping by the restaurant after a late night of drinking.

"I was eating and talking with all of them (from the restaurant). We were joking around. There was the father, the young kid and the guy they showed on TV," he said.

"And then they asked me: 'what's your nationality?' I said 'I'm half Mexican, half Israeli.' Conversation over."

In 2011, the Rahami family filed a lawsuit against the city of Elizabeth and local police, accusing them of discrimination in forcing the chicken restaurant to close by 10.00 pm.

The suit accused police of unlawfully discriminating against the family between April 2009 and February 2011 on the basis of their Muslim faith and Afghan origin, causing pain, suffering, humiliation and "severe emotional distress."

After being "threatened and harassed," the family claimed that they stopped staying open late and closed at 10.00 pm, losing "substantial business and revenue" at their eat-in and take-out restaurant as a result.

Neighbours complained about the restaurant's noise and late hours. The suit was settled in 2012 in the city's favor.

Rahami's younger brother, who also worked at the restaurant, once fought with police officers who came to force the restaurant to shut down for the night, according to The New York Times.

He then fled to Afghanistan before the case was resolved.

The newspaper reported a quiet evolution in the suspected bomber's behaviour and his religious practice in recent years after what was believed to have been a trip to Afghanistan.

Rahami had disappeared for a while about four years ago, according to the paper.

"It's like he was a completely different person," Flee Jones, a 27-year-old who grew up with Rahami and used to play basketball with him, told the newspaper.

"He got serious and completely closed off."