WASHINGTON (WASHINGTON POST) - Public support for impeaching US President Donald Trump is on the rise, with nearly half of Americans backing such a move, according to two new polls.

A Quinnipiac University poll released Monday (Sept 30) shows that support for impeaching Mr Trump and removing him from office has grown from 37 per cent of registered voters at the start of last week to 47 per cent in the latest survey, which was conducted Friday through Sunday. An identical 47 per cent say Mr Trump should not be impeached.

A CNN poll, also released Monday, shows impeachment support at an identical 47 per cent among American adults. That represents a rise from 41 per cent in May, when the cable network last asked the question.

Both surveys come as Mr Trump is coming under increasing scrutiny for a July phone call in which he urged Ukrainian President Volodymyr Zelensky to investigate former vice-president Joe Biden, a leading Democratic presidential contender, and his son Hunter Biden at a time when the White House had suspended military aid to Ukraine.

House Democrats launched an impeachment investigation into Mr Trump on Sept 24. In the ensuing days, a rough transcript of the call and a redacted version of a complaint by an anonymous whistleblower at the heart of the controversy were released by the White House.

On Monday, pressure on the White House escalated as three House committees issued a subpoena to Mr Rudy Giuliani, Mr Trump's personal lawyer, demanding that he turn over all records pertaining to his contacts regarding Ukraine, the Biden family and related matters.

Other recent polls have found Americans roughly divided over impeachment.

Both the CNN poll and the Quinnipiac survey found movement among political independents, a critical group that has consistently opposed impeachment.

The CNN poll shows an 11-point rise in support for impeachment among independents, from 35 per cent in May to 46 per cent. 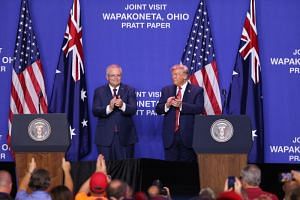 Debate over release of details of man behind complaint

In the Quinnipiac poll, independents' support for impeaching Mr Trump has grown from 34 per cent a week ago to 42 per cent through Sunday; a majority of independents, however, say Mr Trump should not be impeached and removed from office.

In the Quinnipiac poll, another big reason for the shift appears to be that Democrats are increasingly united in their support for impeachment. Support among Democrats has risen from 73 per cent a week ago to 90 per cent in the survey released Monday. The CNN poll did not show a significant change among Democrats.

Interestingly, despite an apparent rise in impeachment support, the Quinnipiac poll shows no drop-off in Mr Trump's job approval rating, which stands at 41 per cent among registered voters, similar to his 40 per cent rating a week ago. Mr Trump's latest 53 per cent disapproval mark is one of the lowest this year.

Also noteworthy is that the CNN poll's finding of 47 per cent in support of impeachment matches a previous high in CNN polling, from September 2018.

On a conference call with House Democrats on Sunday afternoon, one day before the release of the two latest surveys, House Speaker Nancy Pelosi told her colleagues that public sentiment - something she had frequently cited as an obstacle to pursuing impeachment - had begun to swing around.

"The polls have changed drastically about this," she said, urging a careful approach, according to notes taken by a person on the call. "Our tone must be prayerful, respectful, solemn, worthy of the Constitution."

The Quinnipiac University poll was conducted Sept 27-29 among a random national sample of 1,115 registered voters reached on cellphones and landlines. The margin of sampling error for overall results is plus or minus 3.6 percentage points.

The previous Quinnipiac poll was conducted Sept 19-23 among 1,337 voters and carried a 3.2-point error margin.

The CNN poll, meanwhile, was conducted among a random national sample of 1,009 adults reached Sept 24-29 on cellphones and landlines and has a margin of sampling error of plus or minus 3.5 percentage points.