LOS ANGELES (DPA, NYTIMES, WASHINGTON POST) - Police have detained a male suspect for questioning after he turned himself in shortly after opening fire at the Chabad of Poway synagogue in Poway, California, on Saturday morning (April 27).

The shooting left one dead and three injured, according to authorities.

Officials have identified the suspect as John Earnest, a white 19-year-old man armed with an AR-15-style weapon.

Local officials called the shooting a hate crime. The gunman had shouted that Jews were ruining the world as he stormed the synagogue, according to a government official familiar with the investigation.

Police are investigating a possible connection between the gunman and a manifesto that was posted before the shooting on the online message board 8chan.

The document echoes the manifesto that was posted to 8chan by the gunman in last month’s mosque slaying in Christchurch, New Zealand. The document’s author, who identified himself as John Earnest, claimed to have been inspired by the Christchurch massacre and motivated by the same white nationalist cause.

The author also claimed responsibility for a fire at a mosque in Escondido, California, last month. Police are looking into whether there is a connection between the two episodes.

The San Diego County Sheriff's Department responded to reports of an active shooter at the synagogue just before 11.30am.

The Poway Sheriff's Station confirmed the shooting via Twitter, after deputies were called to the scene by "reports of a man with a gun".

Saturday's shooting marks the six month anniversary of the massacre at Pittsburgh's Tree of Life synagogue that left 11 dead.

One of the victims, an adult female, "succumbed to their wounds", Mayor Vaus said.

Three others remain in the hospital with non-life-threatening injuries - one female child and two adult males.

All three were in stable condition.

Update: Poway Mayor Steve Vaus says one person is dead and three are injured following a synagogue shooting in California.https://t.co/3q51U7VHQu

Among the injured was Rabbi Yisroel Goldstein, whose hand was wounded.

Ms Minoo Anvari, a member of the congregation, told CNN that "he did not leave his congregation until he was finished speaking to them - calming their fears and pledging resilience".

Ms Anvari, whose husband was inside when the gunfire began, said: "Everybody was crying and screaming." 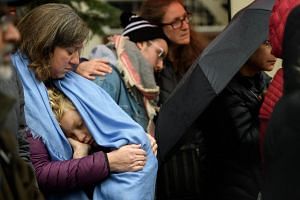 The synagogue did not have a guard at the time, a local official said, and there were about 40 to 60 people there at the time of the shooting.

Sheriff Gore said the gunman’s weapon may have malfunctioned, cutting the attack short.

San Diego police chief David Nisleit said that after the shooting, the gunman called the California Highway Patrol to report his location on Interstate 15 in Rancho Bernardo.

A police officer who was responding to the synagogue attack exited the freeway and saw the gunman in his car. The man pulled over, jumped out of his vehicle and put his hands up, police chief Nisleit said, and the officer saw a rifle on the car’s front passenger seat.

The Chabad hosts a weekly Kiddush luncheon that followed the Shabbat morning services.

On Saturday, the synagogue was also holding a Passover celebration, according to 10News, which was scheduled to end at 7pm with a final holiday meal.

Democratic Representative Scott Peters wrote on Twitter condemning the act of violence: "Tragic news that a gunman has attacked Chabad of Poway synagogue, on this, the last day of Passover, a day that is supposed to be a celebration of faith and freedom. I am thinking of, and praying for, those hurt and affected."