WASHINGTON (NYTIMES) - The still-secret report on Russian interference in the 2016 election submitted by the special counsel, Mr Robert Mueller, last week was more than 300 pages long, according to United States officials with knowledge of it, a length that raises new questions about Attorney-General William Barr's four-page summary.

Mr Barr wrote to Congress on Sunday (March 24) offering what he called the "principal conclusions" of the report - including that Mr Mueller had not found evidence that the Trump campaign took part in a conspiracy to undermine the election.

But he had notably declined to publicly disclose its length.

The total of 300-plus pages suggests that Mr Mueller went well beyond the kind of bare-bones summary required by the Justice Department regulation governing his appointment and detailed his conclusions at length.

And it raises questions about what Mr Barr might have left out of the four dense pages he sent to Congress.

Democrats, who like all other lawmakers have not seen the report, have all but accused Mr Barr of covering up damaging information it contains.

They have specifically focused on an apparent difference between the views of Mr Barr and Mr Mueller on whether President Donald Trump obstructed justice. 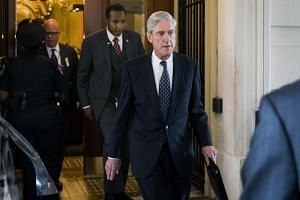 Democrats have demanded that the Attorney-General make the full report and evidence public.

The US officials spoke anonymously because they were not authorised to discuss details of the report, entitled "Report on the Investigation into Russian Interference in the 2016 Presidential Election".

Representative Jerrold Nadler of New York, chairman of the Judiciary Committee, added the description "very substantial" after talking to Mr Barr on Wednesday, although neither he nor any other member of Congress has seen it and he declined to give a page count.

Mr Andrew Napolitano, a legal analyst for Fox News and a favourite of Mr Trump, caused a stir on Wednesday when he said multiple times on the air that the report was 700 pages.

A Justice Department spokesman did not respond to a request for comment.