WASHINGTON (WASHINGTON POST)- In a tense meeting in early March with the special counsel, President Donald Trump's lawyers insisted he had no obligation to talk with federal investigators probing Russia's interference in the 2016 presidential campaign.

But Special Counsel Robert Mueller responded that he had another option if Trump declined: He could issue a subpoena for the president to appear before a grand jury, according to four people familiar with the encounter.

Mueller's warning - the first time he is known to have mentioned a possible subpoena to Trump's legal team - spurred a sharp retort from John Dowd, then the president's lead lawyer.

"This isn't some game," Dowd said, according to two people with knowledge of his comments.

"You are screwing with the work of the president of the United States."

The flare-up set in motion weeks of turmoil among Trump's attorneys as they debated how to deal with the special counsel's request for an interview, a dispute that ultimately led to Dowd's resignation.

In the wake of the testy March 5 meeting, Mueller's team agreed to provide the president's lawyers with more specific information about the subjects that prosecutors wished to discuss with the president. 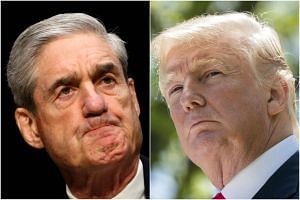 A look at the questions Mueller wants to ask Trump: Flynn, Comey, Sessions and Russia

With those details in hand, Trump lawyer Jay Sekulow compiled a list of 49 questions that the team believed the president would be asked, according to three of the four people, who spoke on the condition of anonymity because they were not authorised to talk publicly. The New York Times first reported the existence of the list.

The questions focus on events during the Trump campaign, transition and presidency that have long known to be under scrutiny, including the president's reasons for firing then-FBI Director James Comey and the pressure he put on Attorney General Jeff Sessions to resign.

Now Trump's newly reconfigured legal team is pondering how to address the special counsel's queries, all while assessing the potential evidence of obstruction that Mueller might present and contending with a client who has grown increasingly opposed to sitting down with the special counsel.

Without a resolution on the interview, the standoff could turn into a historic confrontation before the Supreme Court over a presidential subpoena.

The president has repeatedly decried the investigation as a "witch hunt.""Oh, I see...you have a made up, phony crime, Collusion, that never existed, and an investigation begun with illegally leaked classified information. Nice!" Trump tweeted Tuesday.

Trump's remade legal team is now led by former New York mayor Rudy Giuliani, who told The Washington Post on Tuesday that he views Mueller as the utmost professional, but is still reviewing documents and considering conditions he might set before deciding whether to recommend that Trump agree to an interview.

"Hopefully we're getting near the end. We all on both sides have some important decisions to make," Giuliani said.

"I still have a totally open mind on what the right strategy is, which we'll develop in the next few weeks."

In the meantime, Trump's lawyers are also considering whether to provide Mueller with written explanations of the episodes he is examining.

After investigators laid out 16 specific subjects they wanted to review with the president and added a few topics within each one, Sekulow broke the queries down into 49 separate questions, according to people familiar with the process.

Paul Rosenzweig, who worked as a senior counsel on independent counsel Ken Starr's investigation during the Clinton administration, predicted that the president would face a long interview if the special counsel hewed to the list Sekulow compiled.

"Each of these topics results in dozens of questions. To be honest, that list is a two-day interview. You don't get through it in an hour or two."

For his part, Trump fumed when he saw the breadth of the questions that emerged out of the talks with Mueller's team, according to two White House officials.

The president and several advisers now plan to point to the list as evidence that Mueller has strayed beyond his mandate and is overreaching, they said.

"He wants to hammer that," according to a person who spoke to him Monday.

"Mueller is in Kenny Starr territory now," said another Trump adviser, referring to how the controversial independent counsel investigation of Bill and Hillary Clinton's real estate deals in Arkansas ended up probing the president's lies about a sexual relationship with a White House intern.

Trump advisers are particularly frustrated by the Mueller team's focus on whether Trump was obstructing justice by trying to push last summer for Sessions to resign. If the attorney general had stepped down, Trump could have chosen a replacement who was not recused from running the Russian investigation.

Dowd has repeatedly argued that the president has ultimate authority under the Constitution to fire or demote any of his appointees and that his firing decisions cannot be used as evidence of obstruction.

The revelation of the scope of the questions before the president's team could further complicate recently renewed talks between the special counsel and Trump's attorneys about a possible interview.

Last week, Giuliani met with Mueller to reopen negotiations for a presidential interview.

Giuliani conveyed the ongoing resistance of Trump and his advisers to a sit-down but did not rule out the possibility.

Still, Trump remains strongly opposed to granting Mueller an interview - resistance fuelled largely by the raids last month on the office and residences of his personal attorney Michael Cohen.

Trump's anger over the Cohen raids spilled into nearly every conversation in the days that followed and continues to be a sore point for the president. One confidant said Trump seems to "talk about it 20 times a day."

Other associates said they often stand silent, in person or on the phone, as he vents about the Cohen matter, knowing that there is little they can say.

Alan Dershowitz, a well-known lawyer and Trump advocate, said Tuesday that it would be dangerous and unwise for Trump to agree to an interview.

"The strategy is to throw him softballs so that he will go on and on with his answers," he said. "Instead of sharp questions designed to elicit yes or no, they make him feel very comfortable and let him ramble."

In that setting, Dershowitz said, the prosecutors could catch Trump in a misstatement.

Should Mueller seek to compel Trump's testimony using a subpoena, a legal battle could ensue that could delay the investigation and force the issue into the courts, potentially to the Supreme Court.

Trump's team could argue that Mueller was seeking information about the president's private conversations that are protected by executive privilege or that a grand jury interview would place an unnecessary burden on the president's ability to run the country.

Judges have generally held that the president is not above the law and can be subjected to normal legal processes - but the issue of a presidential subpoena for testimony has not been tested in court.

Starr subpoenaed President Bill Clinton for grand jury testimony in 1998 but withdrew it after Clinton agreed to testify voluntarily. He was interviewed at the White House, appearing before the grand jury via video.

Rosenzweig, a senior fellow at the R Street Institute, a nonpartisan think tank, said judges generally like to accommodate a president because he has to be free to "manage the affairs of the world and deal with nuclear war without having to worry about whether he has to show up for an interview the next day."

But, he added, courts are loath to say the president can't be investigated.

"The opposite argument is that no man is above the law, and if it's a lawful investigation, then he must respond," Rosenzweig said.

Some legal experts believe that two Justice Department opinions prohibit federal prosecutors, including Mueller, from charging a president with a crime. Instead, they said, the Constitution relies on Congress' power to impeach as the route to hold a president accountable for potentially criminal behaviour.

Trump's lawyers could then argue that he cannot be forced to testify under subpoena, unless his testimony is necessary to indict someone else.