LOS ANGELES (REUTERS) – Australian model and actress Miranda Kerr has handed over millions of dollars worth of jewellery that US authorities say was given to her as part of a Malaysian money laundering scheme, her spokesman said on Tuesday (June 27).

Kerr, a former Victoria’s Secret model, was given diamond pendants, earrings and other jewellery worth about US$8 million (S$11 million) in 2014 by Malaysian financier Jho Low, according to a June 15 US Department of Justice civil lawsuit.

Kerr is not accused of any wrongdoing and her spokesman said she has co-operated fully with US authorities from the start of the inquiry.

“The transfer of the jewellery gifts from Ms Kerr’s safe deposit box in Los Angeles to government agents was completed on last Friday afternoon,” the spokesman said in a statement.

The gifts of jewellery were detailed in the Justice Department’s lawsuit, in a long-running case over an alleged conspiracy to launder money misappropriated from the 1Malaysia Development Berhad fund, known as 1MDB, which was set up by Malaysian Prime Minister Najib Razak in 2009 to promote economic development.

The Justice Department alleges that more than US$4.5 billion was taken from 1MDB by high-level fund officials and their associates. 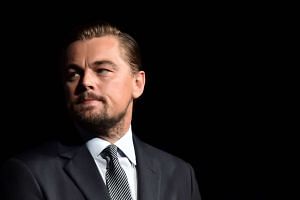 Kerr, who was in between marriages to actor Orlando Bloom and Snapchat co-founder Evan Spiegel at the time, was given a heart-shaped diamond necklace worth US$1.8 million, with her initials inscribed on the back, as a 2014 Valentine’s Day gift from Low, according to the lawsuit.

Later in 2014, investigators said, Low gave Kerr a second, pink diamond, pendant worth US$4.8 million, followed by matching earrings, a bracelet and a ring worth almost US$2 million.

The lawsuit said the funds for the jewellery were misappropriated from the 1MDB account.

Low, whose whereabouts are unknown, could not be reached for comment.

Actor Leonardo DiCaprio also is tied up in the scandal after accepting artwork by Picasso and Basquiat worth more than US$12 million from financiers connected with the 1MDB case, along with an Oscar once owned by actor Marlon Brando.

DiCaprio is cooperating with authorities and has initiated the return of the items, his spokesman has said.

DiCaprio’s involvement stems from his 2013 film The Wolf Of Wall Street, which investigators allege was financed through Hollywood production company Red Granite with US$100 million diverted from the 1MDB fund.

Red Granite has denied any wrongdoing and has said it is fully co-operating with the Justice Department.