NAIROBI (BLOOMBERG) - Investigators of an Ethiopian Airlines crash have concluded that the same system that malfunctioned in an earlier accident off Indonesia was activated, and they are searching for a key piece of equipment that might explain why, according to people briefed on the probe.

Preliminary flight data from the Boeing Co. 737 Max jet's black-box recorder indicates that a new anti-stall system known as MCAS was pushing the plane's nose down during the March 10 disaster, said the people, who asked not to be named because the findings aren't yet public.

One of two sensors known as angle-of-attack vanes, located near the nose of the aircraft, would have to malfunction or be damaged to cause the scenario suspected in the crash.

Searches of the wreckage as of Thursday night had failed to locate the part believed to have been involved, said one of the people.

The sensor's role in engaging MCAS will put more scrutiny on whether Boeing was too reliant on a single device to trigger an important change in the jetliner's trajectory.

Regulators, lawmakers and federal investigators are reviewing whether Boeing cut corners as it raced to get the 737 Max to market to counter Airbus SE's A320neo aircraft.

Evidence from the flight-data recorder of the Ethiopian 737 Max 8 showed that the missing sensor was malfunctioning and that a device known as a "stick-shaker" - which makes a loud nose and rattles a pilot's control column to warn of an impending aerodynamic stall - had been activated on the same side of the aircraft.

It could be heard on the cockpit voice recorder, the person said. 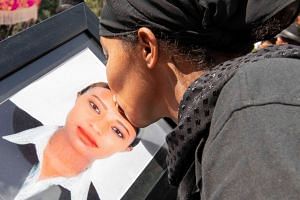 The details about the sensor, which haven't previously been reported, indicate a scenario similar to the one on the final flight of a Lion Air jet that crashed on Oct 29 off the coast of Indonesia.

The pilots were battling an automated feature called the Manoeuvring Characteristics Augmentation System, MCAS for short, and weren't able to shut if off as the jet plunged into the Java Sea. That accident claimed 189 lives, while the Ethiopian crash killed 157.

The preliminary data showing that MCAS was active during the Ethiopia flight is the first hard link between the two crashes that resulted in the grounding March 13 of the 737 Max, the newest version of Boeing's single-aisle workhorse.

But the information also leaves unanswered many questions, they said.

Boeing and the US Federal Aviation Administration issued a bulletin after the Indonesia crash alerting pilots to the potential for MCAS to push down a plane's nose during a malfunction and highlighted a relatively simple procedure to disable it if that occurred - turning off two switches in the cockpit. Ethiopian Airlines trained its pilots on how to perform the procedure, airline officials have said.

Pilots can overcome MCAS in the short run by hitting switches on their control column that control a plane's trim to raise its nose. Activating those switches temporarily disables MCAS, though only for a few seconds at a time.

A separate procedure to shut off power to the plane's trim motors, which pilots on all 737 models are taught, is how Boeing advises pilots to handle an MCAS malfunction. There is a separate manual trim system that can be used to control a plane after such an emergency.

The reason why the angle-of-attack sensor would have malfunctioned in the Ethiopia crash isn't yet clear either, said the people. Finding the device in the wreckage may provide evidence as to whether it was damaged - which could occur while the plane was on the ground or from a bird during takeoff or flight - or suffered some other fault.

A spokesman for Ethiopian Air, Transport Minister Dagmawit Moges and Ethiopian Civil Aviation Authority Director General Wosenyeleh Hunegnaw didn't respond to messages seeking comment on the angle of attack sensor. Representatives of Boeing and the FAA declined to comment and the US National Transportation Safety Board said it couldn't comment on a foreign-led investigation.

In the Lion Air tragedy, the sensor had failed on an earlier trip and wasn't repaired before the fatal flight, according to initial findings.

The Wall Street Journal reported earlier Friday that the MCAS had activated before the Ethiopian Airlines plane crashed.