NEW YORK - Singapore’s water innovation and management were among key issues in Minister for the Environment and Water Resources Masagos Zulkifli’s presentation in New York on Wednesday (July 18) at the High-Level Political Forum on Sustainable Development.

Singapore was one of 47 countries presenting Voluntary National Reviews at the event, which is the UN’s forum for providing political leadership, guidance and recommendations on implementing the 2030 Agenda for Sustainable Development, and the 17 Sustainable Development Goals, which include no poverty, zero hunger, good health and affordable clean energy.

He also highlighted the country’s “wastewater superhighway”, the Deep Tunnel Sewerage System, to collect and transport wastewater.
“The current tunnel, 48km long and linked to 60km of sewers, will be extended by 100km by 2025 to transport and turn more wastewater into Newater for industrial use and domestic consumption.”

Separately, in an interview with The Straits Times, Mr Masagos said: “There are existential issues we have defined for ourselves; water is one example. And when people think the problem is over, suddenly something happens that reminds us it is not.”

“Even (nature) is not reliable. Our rainfall in Singapore has been falling over the years,” he noted.
A key challenge was technology.

“By moving away from nature to used water, and also desalinated water, instead of being weather-reliant, we have become energy-reliant, and now, our new pursuit is to find energy solutions to our water problem,” he said. 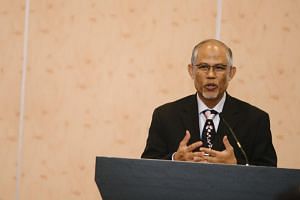 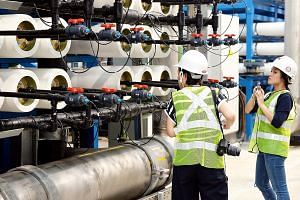 But there are opportunities behind all the climate change-related challenges mankind is facing, he said.

“In our case, water is the best illustration; we are turning to technology to resolve the problems.”

He added: “Even after finding reverse osmosis will solve our problem, we are looking for technologies to reduce the amount of energy by half of what we’re (using) today.”

One emerging global environmental concern is the prevalence of single-use plastics.

A ban on plastic bags would address part of the problem, Mr Masagos said. But other single-use plastics such as forks and spoons, and packaging, were also an issue.

“There will be parts of it where we will legislate,” he said, giving the example of legislation requiring packaging producers, from 2020, to report how much packaging they are putting into the environment.

Tackling packaging and electronic waste will be part of nudging the industry into a “circular economy so we can recover as much resources as possible before they become waste or (get) incinerated”, he said.

“It’s not just that the (Sustainable Development Goals) are connected, these are all transboundary issues... what some country does will affect us and what we will do affects each other,” he said.

“We have to work together to resolve climate change; if we are not together, we just can’t get there.”

He added: “Climate change is real and everybody is going to suffer if everybody doesn’t cooperate. It is about consumers also recognising they, too, have a big impact.”