The Mexican Foreign Ministry made the announcement without immediately providing further details.

Guzman, who was recaptured a year ago after having escaped from a Mexican prison in July 2015, is wanted in the United States for trafficking heroin, cocaine and other drugs across the border, among other crimes. He has been indicted in at least seven US federal courts.

Guzman has been transferred to US custody, the Associated Press reported. "The government... today handed Mr. Guzman Loera to the US authorities," the Foreign Ministry said in a statement. 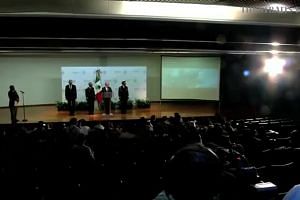 Guzman, who has twice escaped from Mexican prisons, was turned over to officers of the US Drug Enforcement Administration in Ciudad Juarez, across the border from El Paso, Texas, AP reported.

He was then put on a plane bound for New York, one of the jurisdictions where he faces federal charges, AP said.

Guzman was transferred to a prison near Ciudad Juarez in May last year in preparation for his eventual extradition.

The transfer came on the last full day of President Barack Obama's term, but there was no immediate indication that the timing was related to Friday's (Jan 20) inauguration of President-elect Donald Trump.