The one-week trip, which begins next Monday (Oct 1), will take her to a part of the world that has a tense relationship with her husband's administration.

"Whether it is education, drug addiction, hunger, online safety or bullying, poverty or disease, it is too often children who are hit first, and hardest, across the globe," Mrs Trump said at a reception at the US Mission to the United Nations, where she announced her travel plans.

"Each of us hails from a country with its own unique challenges, but I know in my heart we are united by our commitment to raising the next generation to be happy, healthy and morally responsible adults."

The audience included the first ladies of several of the countries she will visit, along with Mrs Karen Pence, wife of Vice-President Mike Pence, and Mrs Susan Pompeo, the wife of Secretary of State Mike Pompeo.

Mrs Trump said she chose those four countries because they "have worked alongside USAID (US Agency for International Development) and our partners to make great progress in overcoming some of their biggest challenges."

The continent is a place that every modern first lady has visited. Mrs Laura Bush made programmes promoting health in Africa a major part of her tenure, particularly in her husband's second term, when she made seven trips to countries there.

Mrs Michelle Obama visited twice without her husband, in 2011 to South Africa and Botswana, and in 2016 to Morocco and Liberia, taking her daughters along for both trips.

But Mrs Trump's visit is more fraught than those of her predecessors. 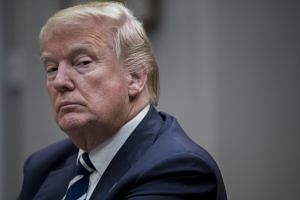 During a meeting with lawmakers in January, President Donald Trump referred to Haiti and some African nations as "s***hole countries" during a discussion of a proposed bipartisan immigration deal, according to officials who were there.

He later denied using such language.

Reports had previously circulated that he had questioned why Nigerians in the US on visas would ever want to return to their "huts".

The Trump administration further alienated African nations in March when the President fired secretary of state Rex Tillerson when the nation's top diplomat was only a few days into what was supposed to be a week-long apology trip to the continent. Mr Tillerson missed a day of planned meetings, citing ill health, and ultimately cut the trip short.

And the most recent perceived insult came earlier this month when Spain's foreign minister said that Mr Trump had suggested to him building a wall across the Sahara as a way of dealing with Europe's migration crisis.

Those comments were taken to mean that Africans should be contained, said Mr Judd Devermont, director of the Africa Programme at the Centre for Strategic and International Studies. The Trump administration has yet to articulate a comprehensive policy towards Africa, he said, and in the absence of such substance, Mr Trump's disparaging offhand remarks and tweets have filled the void.

President Trump, in formal remarks to the General Assembly on Tuesday, did not mention Africa, though on Wednesday morning, he addressed his wife's upcoming trip.

"We love Africa," he told reporters outside the UN headquarters, and called the continent "beautiful - the most beautiful part of the world in many ways".

Against the backdrop of such accumulated slights, the trip could put Mrs Trump in an awkward spot.

"People will be looking to her to understand the Trump Africa policy, and the burden is on her to counter the narrative," Mr Devermont said. "That's a difficult position to be in."

Mrs Trump, though, may be well positioned smooth things over, said Ms Anita McBride, who was Mrs Bush's chief of staff in the East Wing.

At the reception on Wednesday, the first lady said that at each stop on the African continent, she would focus on programmes overseen by the USAID. Hinting at her agenda during the trip, Mrs Trump mentioned the agency's work in Ghana to improve healthcare and nutrition.

In Malawi, she noted, USAID has promoted education as a means of combating poverty, and in Kenya, it has projects on early education, wildlife conservation and HIV prevention.

"Her presence could help soften hard feelings," Ms McBride said. "Generally, first ladies can represent the American people in a gentler way than a president can, because of the tougher things presidents have to do."

Ms Linda Thomas-Greenfield, a former assistant secretary of state who is now a senior counsellor at Albright Stonebridge Group, says she thinks African people, particularly the leaders of the countries the first lady visits, are eager to hear from her.

"It will offer her an opportunity to establish her own interests and activities - and her own message that hopefully will play differently from the message that Africans have heard so far from the President," she said. "I think she will be greeted with respect."

The trip could be a significant moment for Mrs Trump, who has taken a lower profile than many other first ladies, and whose Be Best initiative has been relatively modest.

On her visits to Africa, Mrs Obama highlighted her Let Girls Learn initiative at visits to schools and events with young women leaders. Mrs Bush focused on efforts to combat Aids, in line with her husband's brand of "compassionate conservatism" and the President's Emergency Plan for Aids Relief programme her husband helped establish in 2002.

"It's not like a secretary of state going in, where there are bilateral meetings and treaty signings and that sort of thing," she said. "That's where a first-lady trip is so valuable. It's a sign of respect that invariably includes substantive work - shining light on programmes - but it also offers the chance to absorb the culture of the country and meet people outside of the official bubble, and that is an important diplomatic move."

Also arguing for her success? Mrs Trump is better liked than her polarising husband: The first lady had a 51 per cent approval rating versus President Trump's 40 per cent in a June CNN poll - and 26 per cent of those who did not approve of the President still had a favourable impression of her.

Mr Devermont agreed that a first lady bringing attention to programmes and initiatives that uplift Africans could help affirm the US commitment to the continent - but he said such soft diplomacy has its limits.

"There is an opportunity to change the narrative, but it's a particularly deep hole that's been dug, and that's why it's unfair to rest all of that job on her shoulders."