The former model is always elegantly turned out and perfectly coiffed, and Tuesday (Aug 29) was no exception as she left the White House with her president husband for storm-ravaged Texas.

Trump was photographed walking across the White House lawn in sky-high stiletto pumps, part of an outfit that included tailored capri pants, an army green bomber jacket with ruched sleeves and aviator sunglasses. 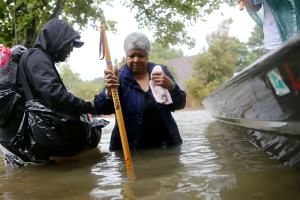 Added comedian Jessica Kirson: "Brilliant idea @FLOTUS. You can pick up debris with your heels."

However, by the time the plane had landed, Melania Trump sported a more storm-appropriate outfit: white sneakers and crisp white shirt, with a ponytail pulled through a black baseball cap emblazoned with the word “FLOTUS".

A wide swath of Texas is reeling from monster storm Harvey, which has killed at least six people and left large parts of Houston - America's fourth largest city - underwater. Tens of thousands of people are packed into overcrowded shelters as authorities continue to pluck victims from rooftops.

The Trumps will make stops west of Houston, including in the hard-hit coastal city of Corpus Christi.

I guess Melania is used to wearing heels around a disaster area. #MarineOne pic.twitter.com/3viUq6uqdB

I gotta believe Melania is going to change out of the stilettos on the plane. Those were just her "walking to Air Force One" shoes.

I fear Melania Trump’s four-inch heels may not last the day. pic.twitter.com/cEngzLn3ck