Asked for one thing she respected about Mr Trump at the end of their second, bruising presidential debate in October, Mrs Hillary Clinton pointed to his children.

"They are incredibly able and devoted and I think that says a lot about Donald," she said.

Four of them have shared the spotlight with their billionaire tycoon father in his unlikely road to the White House. All have impressed as polar opposites of Mr Trump, as poised and articulate as he was brash and blustery.

Mr Trump's own siblings - Maryanne, Elizabeth, and Robert - have largely stayed behind the scenes but are also known to be very different from their outspoken sibling.

"Maybe they mixed us at birth," Mr Trump once said.

Here's a look at the members of the soon-to-be First Family.

The oldest of the billionaire's brood is the oldest of three children Mr Trump had with his first wife, Czech model Ivana Zelnickova. Mr Trump Jr, known to his friends as Donny, is also married to a model, Ms Vanessa Haydon, and has five children.

The 39-year-old works alongside his younger siblings as the executive vice-president of his father's real estate company, The Trump Organisation, but has tried to keep a low profile - until his father's campaign.

Speaking on his father's behalf at the Republican National Convention in July, when Mr Trump was anointed the party's presidential nominee, he took aim at the state of public education, although The Washington Post was quick to point out that he and his siblings attended private schools

"Our schools used to be an elevator to the middle class. Now they're stalled on the ground floor," he said.

He has compared refugees to a bowl of poisoned Skittles and is known, together with his younger brother Eric, for his love of big-game hunting. He has been photographed with an elephant's tail, next to a dead crocodile, and holding a hunting rifle as he posed with a dead bison.

He has talked of hunting not just as a pastime, but as an important influence on his character, reported The Washington Post. "I owe the outdoors way too much to try to do the usual apologise and hide thing," he said.

Mr Trump's elder daughter is the most famous and popular among his children.

Ivanka, 34, works in her father's real estate firm as executive vice-president of development & acquisitions. She was a model who made Maxim magazine's Hot 100 women in 2007 and also has her own fashion and jewellery line, the Ivanka Trump Collection.

However, her success in business has been overshadowed somewhat by her looks, growing celebrity on her father's reality TV show, The Apprentice, and now as the leading surrogate for her father on the campaign trail.

She has performed her role ably, including countering characterisations of her father as a misogynist. She described him as "colour-blind" and "gender neutral" in her speech just before Mr Trump's acceptance speech as the Republican nominee at the party's national convention in July.

The youngest of Mr Trump's children with Ivana is Eric who is 32, recently married with no children, and another vice-president in Mr Trump's firm. There, he has focused on its golf courses, increasing the company's number from three to 17 in three years.

Eric took the convention podium to praise his father prior to the speech by vice-presidential nominee Mike Pence. He highlighted Mr Trump's business acumen as the reason Americans should choose him to lead their country.

"It's time for a president who understands the art of a deal and appreciates the value of a dollar - our tax dollars," he said.

The young man himself founded a charity in 2006, the Eric Trump Foundation, which raises funds for children battling life-threatening diseases. H e also hunts wildlife like cheetahs and crocodile for sport.

On Tuesday, he had to delete a tweet showing his vote in the ballot as the move could be considered illegal.

The only child of Mr Trump and Ms Marla Maples was reportedly named after Tiffany and Company, after her father made a business deal with the jewellery house.

Like her half-brother Donald, Tiffany, 22, graduated from the University of Pennsylvania.

Her passion is music and she released a single in 2014, Like A Bird. She is also big on Instagram and has some 100,000 followers.

Her speech on the second night of the convention lasted all of five minutes but was heartfelt. She reminisced about how her father would write notes on her primary school report cards praising her work, and said "in person, my father is so friendly, so considerate, so funny and so real". 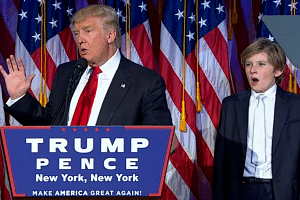 Aged just 10, Barron is the only child of the 70-year-old property billionaire and his third and current wife, Slovenian model Melania.

He made headlines for trying valiantly to stay awake during his father's rambling victory speech in the early hours of Wednesday (Nov 9), much as he had done during the President-elect's rambling 75-minute-long acceptance speech as nominee at the Republican National Convention in July.

Earlier this year, Mrs Trump spoke of her and her husband's relationship with Barron with US Weekly. "We always spend quality time together over the weekends. He and Barron golf together when it's possible," she said.

She told Parenting magazine she has a nickname for the boy: "His personality is why I call him Little Donald."

Successful in her own right, Mr Trump's older sister Maryanne was nominated by President Ronald Reagan as a Federal District judge and by President Bill Clinton to serve as a judge on the United States Court of Appeals for the Third Circuit, a position she still holds at the age of 78.

She has three decades of experience on the bench and has been praised for her professionalism, sober legal arguments, and razor-sharp wit. She is also known for defending abortion rights. In short, Mrs Barry is the polar opposite of her brother. She is very private and has stayed out of the media glare during her brother's presidential campaign.

Yet the two have stayed close: Mr Trump has regularly attended events over the years honouring his sister and her work; and Mrs Barry has credited her brother's influence with having helped her secure a seat on the bench in the first place, reported RealClearPolitics.

In one respect she is the female version of her brother: Tough talking. The Washington Post reported that in 1991, when she sentenced a "candy mogul" to 34 years in prison for beating and torching the competitors, she said: "There was neither a way nor a reason to sugarcoat what the defendant is all about. He is, pure and simple, a thug."

Mrs Grau, 74, is even more private than her sister Maryanne. She is a retired executive of the Chase Manhattan Bank in New York and graduated from the Kew-Forest School and Southern Seminary College in Buena Vista, Virginia. She is married to film producer James Grau.

The 68-year-old is the youngest of Mr Trump's siblings. He is President at Trump Management Inc, the business started by their father.

Described as "classy and dignified", Robert was a fixture in the New York social scene in the 1980s and 1990s but has disappeared from the public eye since leaving his wife, popular socialite Blaine Trump, a decade ago for his secretary Ann Marie Pallan. He is now "gainfully retired", as he told Page Six, a website under New York Post.

Robert has gushed about his support for his older brother.