NEW YORK (BLOOMBERG) - Martin Shkreli, the pharmaceutical industry's enfant terrible, was sentenced on Friday (March 9) to seven years in prison, putting an end to a saga that captivated and sometimes enraged Washington, Wall Street and the tabloids.

The brash 34-year-old - who gained notoriety for jacking up the price of a life-saving anti-infection drug - was convicted in August of lying to investors in his hedge funds and manipulating shares in Retrophin, a biotech company he founded.

Prosecutors sought a sentence of at least 15 years for the securities fraud.

Shkreli, who once proclaimed "you can't quell the Shkrel", asked for as little as a year.

"This case is not about Mr Shkreli's self-cultivated public persona," US District Judge Kiyo Matsumoto in Brooklyn, New York, said on Friday before handing down the sentence. His actions were "extremely serious," she said, recounting how he boasted once of threatening an investor and his family.

A remorseful Shkreli told the court he was embarrassed and ashamed, saying he got innocent people mixed up in his conduct.

Addressing his investors, he choked back tears to say, "I am terribly sorry I lost your trust. You deserved far better." 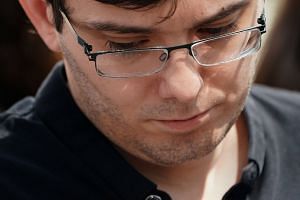 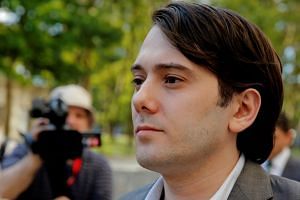 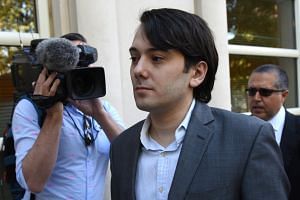 Shkreli's downfall marks an ignominious end to what was once a promising career at the intersection of finance and pharma.

The child of working-class immigrants from Albania and Croatia, Shkreli landed his first job as a 17-year-old college intern for Jim Cramer, the hedge fund manager and host of CNBC's Mad Money. He was soon recommending that investors short biotech shares, becoming so good at it that he found himself under the scrutiny of the Securities and Exchange Commission at 19. The agency found nothing amiss.

He opened his first hedge fund at 23, then launched Retrophin five years later. In 2015, Shkreli infamously hiked - by 5,000 per cent - the price of Daraprim, a life-saving drug for people with compromised immune systems.

He has repeatedly maintained that his primary concern was company profit and investor returns. But detractors accused him of making the drug unaffordable to patients, many of them with HIV, while at the same time gouging insurance companies.

Less than a year later, the US indicted him, accusing Shkreli of running his funds like Ponzi schemes. The evidence showed that Shkreli lied to investors over six years, by hiding the collapse of one fund and the near failure of a second, and by claiming to manage more than US$125 million, when the real figure was closer to US$1.1 million. He was also convicted of a separate scheme to secretly control Retrophin shares, but cleared of stealing company assets.

The Brooklyn prosecutors, whom Shkreli derided as "the junior varsity," argued that Shkreli deserved a long prison term because he told investors a "staggering number of lies," making more than US$40 million and using client money to keep his schemes afloat.

Shkreli also illegally funnelled client funds into Retrophin and used their money to pay personal debts, according to the US.

While the case against Shkreli didn't involve the drama over soaring drug prices, during Friday's sentencing hearing, Matsumoto read some letters from people commenting on Shkreli's fate.

She noted one written by a doctor who said he had "lost a patient to septic shock" due to the unavailablity of Daraprim. She added though that she did not consider Shkreli's actions regarding the drug in sentencing, adding that it is up to Congress to fix the problem of patient access to drugs.

The defence sought a lighter sentence, arguing that Shkreli made money for his investors and should be given the chance to quickly resume research into cures for childhood illnesses.

Shkreli pledged to be honest if Matsumoto cut him a break. In a letter to the judge, he claimed to have learned his lesson, blaming his crimes on "demons" that haunted him: "I was a fool. I should have known better."

Matsumoto revoked Shkreli's bail in September, sending him to a Brooklyn jailhouse where he's been ever since. She decided that he posed a danger to the community: Less than a month after his conviction, he offered in a Facebook post to give $5,000 to anyone who would "grab a hair" from former Secretary of State Hillary Clinton during her book tour.

A prison consultant said in a memo submitted to the judge last month that the offer suggested Shkreli shouldn't be allowed to serve his term in a minimum-security facility.

The judge has also ordered Shkreli to surrender US$7.4 million in profits he made from his crimes. She also said any of his assets - including a Picasso, US$5 million in a personal trading account, a one-of-a-kind Wu-Tang Clan album and shares in a drug company he once ran - could be used to meet the forfeiture if he doesn't have enough available cash.

Matsumoto said he will receive credit for the time he has served since September.