WASHINGTON (NYTIMES) - Defence Secretary Mark Esper said on Sunday (Jan 12) that he never saw any specific piece of evidence that Iran was planning an attack on four US embassies as President Donald Trump had claimed last week as a justification for the strike on an Iranian general that sent the United States and Iran to the brink of war.

"I didn't see one with regard to four embassies," Esper said on CBS' Face The Nation.

But he added, "I share the president's view that, probably, my expectation was they were going to go after our embassies. The embassies are the most prominent display of American presence in a country."

The muddled message on Sunday by Esper and other administration officials only added to the public debate regarding the Jan 3 strike that killed Iran's most important general, General Qassem Soleimani, and whether there was appropriate justification for the killing.

The administration has offered shifting justifications for the strike.

In recent days, administration officials have avoided offering specifics about what exactly prompted the airstrike, but on Friday, Trump said that part of the reason was that Iran was planning attacks on four US embassies.

On CNN's State Of The Union on Sunday, Esper had sounded more supportive of Trump's claim.

"What the president said in regard to the four embassies is what I believe as well," he said.

"And he said he believed that they probably, that they could have been, targeting the embassies in the region." 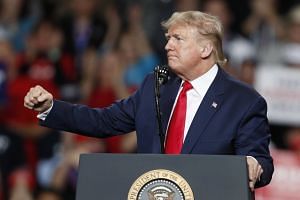 US seeking to amplify voices of protest in Iran amid turmoil

But appearing on Fox News Sunday, Robert O'Brien, the national security adviser, had also played down Trump's claim of specific, imminent threats to four US embassies in the region.

"Look, it's always difficult, even with the exquisite intelligence that we have, to know exactly what the targets are," O'Brien said.

"We knew there were threats to American facilities. Now, whether they were bases, embassies - you know, it's always hard until the attack happens.

"But we had very strong intelligence," he added.

Senator Mike Lee, one of the administration's most outspoken Republican critics in the aftermath of the strike, said on CNN on Sunday that he was "worried" about the quality of the information that national security officials were sharing with Congress and had not "been able to yet ascertain specific details of the imminence of the attack."