WASHINGTON (BLOOMBERG) - The Lion Air pilots whose plane nosedived into the Java Sea in October, killing all those aboard, were battling multiple malfunctions almost as soon as the doomed flight began, according to a trove of new data released by Indonesian investigators.

They faced a cacophony of warnings that started seconds after take-off and continued for the remaining 11 minutes before the crash.

The alerts included a so-called stick shaker - a loud device that makes a thumping noise and vibrates the control column to warn pilots they're in danger of losing lift on the wings - and instruments that registered different readings for the captain and co-pilot, according to data presented to a panel of lawmakers in Jakarta on Thursday (Nov 22).

The data also showed that in the final seconds, as they struggled to pull the Boeing Co 737 Max 8 out of a dive that was being commanded by the plane's flight computers, the pilots were pulling back on the control column with a force of as much as 100 pounds of pressure.

However, the data indicated that the plane was controllable - the pilots had kept it under control for about 10 minutes before the final plunge - and records from the previous flight of the same jet showed another set of pilots had an identical set of failures and landed safely.

"There are so many questions it's sort of hard to put in one short statement," said Mr Roger Cox, a retired investigator with the US National Transportation Safety Board and a former airline pilot.

"I would be very interested in knowing why one crew was able to cope with this stick shaker and trim anomaly, and why the next crew could not," Mr Cox said. "And I'd want to know why Lion Air could not or would not repair the problem." 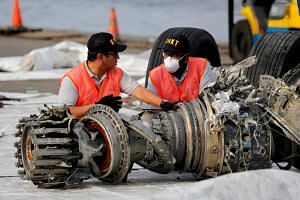 Lion Air Flight 610 crashed on Oct 29, killing all 189 people aboard. The jet was knifing through the air at about 805kmh, or more, in its final seconds as it neared the water, according to the plane's crash-proof flight recorder.

In a statement, Boeing deferred comment to the Indonesian National Transportation Safety Committee. The manufacturer has sent two updates to operators of the Max jet since the crash, which include reminders that there are existing emergency procedures for such situations.

"We are confident in the safety of the 737 Max. Safety remains our top priority and is a core value for everyone at Boeing," the company said.

In the past week, Boeing has stepped up its response by pushing back on suggestions that the company could have better alerted its customers to the jet's new anti-stall feature.

The three largest US pilot unions and Lion Air's operations director, Mr Zwingly Silalahi, have expressed concern over what they said was a lack of information.

As was previously revealed by investigators, the plane's angle-of-attack sensor on the captain's side was providing dramatically different readings than the same device feeding the co-pilot's instruments.

Angle of attack registers whether the plane's nose is pointed above or below the oncoming air flow. A reading showing the nose is too high could signal a dangerous stall and the captain's sensor was indicating more than 20 degrees higher than its counterpart.

The stick shaker was activated on the captain's side of the plane, but not the co-pilot's, according to the data.

Also as a result of the erroneous sensor reading, a new safety feature on the Max called the Manoeuvring Characteristics Augmentation System (MCAS), which automatically tries to lower the plane's nose to prevent stalls, apparently was activated.

The plane's trim system, which makes adjustments that pitch the aircraft's nose up or down, moved more than 30 times during the flight.

The pilots repeatedly countered the plane's attempt to lower the nose by trimming it in the opposite direction. Doing so halts MCAS, but only temporarily.

The pilots at the same time were pulling back on the control yoke, which also raises the nose. While the plane was gaining and losing moderate amounts of altitude, it remained in stable flight until the final dive.

In that last period of about 30 seconds, the data seems to show that the pilots weren't countering the nose-down trim as aggressively. The plane lost about 1,524m in about 20 seconds as it plunged downward.

The data indicate that it became harder to pull the control column back and raise the nose during the dive.

While the data parameters don't specify why, the 737 has a separate safety component that makes it harder to pull back if the plane's instruments indicate it's in a stall. At higher speeds, the onrushing air also makes it difficult to pull.

Mr Cox cautioned that the flight data doesn't tell the complete story. A cockpit recorder, which would help indicate what pilots were thinking about the malfunctions, hasn't been recovered yet.

And while the situation of conflicting instruments and alarms could have been confusing, he said he'd seen "a lot worse" in other investigations.

It's reasonable to ask why the pilots didn't shut off the trim system during the roughly 10 minutes they were assessing the plane's behaviour, he said.

A decades-old emergency procedure teaches pilots to flip two switches to cut power to the motor that was pushing the nose down.

Even more vexing is why the plane exhibited the same malfunctions it had on the previous flight after it was supposedly repaired overnight.

On a flight from Bali to Jakarta on Oct 28, the plane's stick shaker on the captain's side of the plane was active for almost all of the roughly 90-minute flight and the angle of attack readings had the same errors, the data shows.

"Number one, why did the previous crew continue that flight?" Mr Cox said.

"Number two, did they or did they not make an appropriate write-up? The third question is how come you signed this thing off" to fly the next day.