NEW YORK (REUTERS) - The limousine involved in an upstate New York crash that killed 20 people over the weekend failed inspection last month, and its driver did not have the proper licence to operate the vehicle, New York Governor Andrew Cuomo said on Monday (Oct 8).

Cuomo identified the company that owned the 2001 Ford Excursion limousine as Prestige Limousine, a small company based in Gansevoort, New York, according to federal Department of Transportation records.

All three of the company's vehicles had violations when they were inspected last month, records show.

The inspection of the limousine that crashed turned up several violations at the time, including anti-lock brake malfunction indicators and inoperative or defective windshield wipers. The company only employed two drivers, according to the records.

Cuomo told reporters at New York City's Columbus Day Parade on Monday that Prestige Limousine was being sent a cease-and-desist order to halt operations until authorities could investigate. The driver, who was killed in the crash, has not been identified.

Before the limousine crashed on the way to a birthday party, one of the victims, Erin McGowan, texted a friend that the limousine appeared to have engine trouble, the New York Times reported.

"The motor is making everyone deaf," the Times reported McGowan saying.

McGowan's aunt, Valerie Abeling, told CNN her niece had texted a friend saying the company had sent the stretch limousine to replace a vehicle that had broken down.

Robert Sumwalt, chief of the National Transportation Safety Board (NTSB), told CNN on Monday that the accident should be "a wake-up call" for limousine safety.

The NTSB is investigating the crash and will look at safety regulations for limousines, whose passengers are not required to wear seat belts. 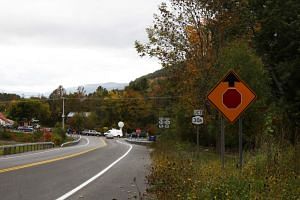 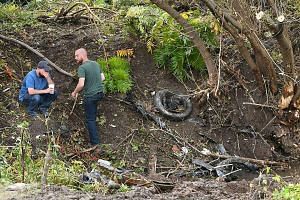 The owner of Prestige Limousine, Shahed Hussain, shares the same name and address as that of a former FBI informant who appeared as a witness in two US cases in which prosecutors brought terrorism charges against defendants, transportation and federal court records showed.

Hussain could not be reached for comment on Monday. The phone line at Prestige Limousine was disconnected.

Hussain was charged in 2002 with helping people illegally obtain driver's licences and eventually became an informant against his co-conspirators in the licence scheme.

In 2004, he testified in a case stemming from a Federal Bureau of Investigation sting operation against two men who were charged with money laundering as part of a plot to import missiles to New York.

Several years later, Hussain posed as a radical militant, helping the government convict four men of plotting to blow up two synagogues and shoot down military planes at an airport in Newburgh, New York.

In both cases, defence lawyers unsuccessfully argued that Hussain had entrapped their clients.

Sumwalt said most of the victims were found inside the vehicle following the crash and one or two victims may have been ejected. Investigators also plan to look into whether the design of the roadway was a factor in the crash.

Officials had not released the victims' names as of early Monday, but some of the names and details were disclosed in media accounts from relatives and Go Fund Me pages.

Erin and Shane McGowan had been married for just five months, the Times Union of Rochester, New York reported.

They were among 17 young adults who climbed into the limo to celebrate their friend's 30th birthday at an upstate New York brewery, the paper and other media reported.

On the way, officials said, the vehicle ran a stop sign at a highway intersection in Schoharie, New York, about 65km west of Albany, police and the NTSB said.

It crashed into an unoccupied parked car and hit two pedestrians before coming to a rest in a shallow ravine, officials said. The driver, all 17 passengers and the two pedestrians died.

Amy Steenburg was also a newlywed. She and her three sisters - Mary Dyson, Allison King and Abby Jackson - and her husband, Axel Steenburg, and his brother, Rich Steenburg, all died, relatives told the New York Times.

"You can't wrap you head around such a tragedy where you have four of your daughters die," Barbara Douglas, the aunt of the sisters, told reporters at the scene.

It was the deadliest transportation accident in the United States since a 2009 plane crash in Buffalo, New York, that killed 49 people, Sumwalt told a news conference on Sunday.