WASHINGTON/KABUL (REUTERS) – The Taliban celebrated their victory over the United States on Tuesday (Aug 31), firing guns into the air, parading coffins draped in US and Nato flags and setting about enforcing their rule after the last US troops withdrew from a shattered Afghanistan.

The Islamist militants now control more territory than when they last ruled before they were driven out in America’s longest war, which took the lives of nearly 2,500 US troops and an estimated 240,000 Afghans, and cost some US$2 trillion (S$2.6 trillion).

“We are proud of these moments, that we liberated our country from a great power,” Taliban spokesman Zabihullah Mujahid said at Kabul airport after a C-17 aircraft took the last troops out a minute before midnight, ending a hasty and humiliating exit for Washington and its Nato allies.

US President Joe Biden has defended his decision to stick to Tuesday’s withdrawal target but in Washington, his Republican opponents said he and his team were to blame for what they called the disaster of the Taliban takeover and rapid US exit.

“What happened is their fault,” Representative Mike Rogers, top Republican on the House Armed Services Committee, said, while other Republicans called for an official investigation.

In Afghanistan, there was a mixture of triumph and elation on the one side as the Taliban celebrated their victory, and fear on the other.

While crowds lined the streets of the eastern city of Khost for a mock funeral with coffins draped with Western flags, long lines formed in Kabul outside banks shuttered since the fall of the capital.

“I had to go to the bank with my mother but when I went, the Taliban (were) beating women with sticks,” said a 22-year-old woman who spoke on condition of anonymity because she feared for her safety.

She said the attack occurred among a crowd outside a branch of the Azizi Bank next to the Kabul Star Hotel in the centre of the capital. “It’s the first time I’ve seen something like that and it really frightened me.”

Biden has said the world will hold the Taliban to their commitment to allow safe passage for those wanting to leave Afghanistan in future, and to uphold human rights.

The US invasion in 2001 drove the Taliban from power and stopped Afghanistan being used by Al-Qaeda as a base to attack the United States and ended a period of Taliban rule from 1996 in which women were oppressed and its enemies crushed.

Taliban spokesman Mujahid said the group wanted to establish diplomatic relations with the world but Germany reiterated that it needed to set up an inclusive government.

Destruction from recent fighting and a hiatus in administration and the foreign aid on which many Afghans depend has left the country in a precarious state and the Taliban does not have complete control.

At least seven Taliban fighters were killed in clashes in the Panjshir valley north of the capital on Monday night, two members of the main anti-Taliban opposition group said.

Several thousand anti-Taliban fighters, from local militias as well as remnants of army and special forces units, have gathered in the valley under the command of regional leader Ahmad Massoud.

More than 123,000 people were evacuated from Kabul in a massive but chaotic airlift by the United States and its allies over the past two weeks, but many of those who helped Western nations during the war were left behind.

US troops destroyed more than 70 aircraft and dozens of armoured vehicles before they left and disabled air defences that had thwarted an attempted Islamic State rocket attack on the eve of their departure.

He was a baby on 9/11. Now he’s one of the last casualties of America’s longest war

Pentagon spokesman John Kirby said the US military was not concerned with images of Taliban members walking through Kabul airport holding weapons and sizing up US helicopters, telling CNN they could inspect all they wanted but could not fly them.

“The threat environment,” however, remains high, he said.

“We’re obviously concerned about the potential for Taliban retribution going forward and we certainly, we saw it ourselves, are mindful of the threat that ISIS-K continues to pose inside Afghanistan.”

ISIS-K is the Islamic State affiliate that claimed responsibility for a suicide bombing outside Kabul airport on Thursday that killed 13 US service members and scores of Afghan civilians.

The US Senate passed legislation to provide aid to Americans returning from Afghanistan and European Union countries proposed to step up assistance to Afghanistan and its neighbours.

But the EU’s 27 member countries could not agree a common policy on accepting asylum-seekers. 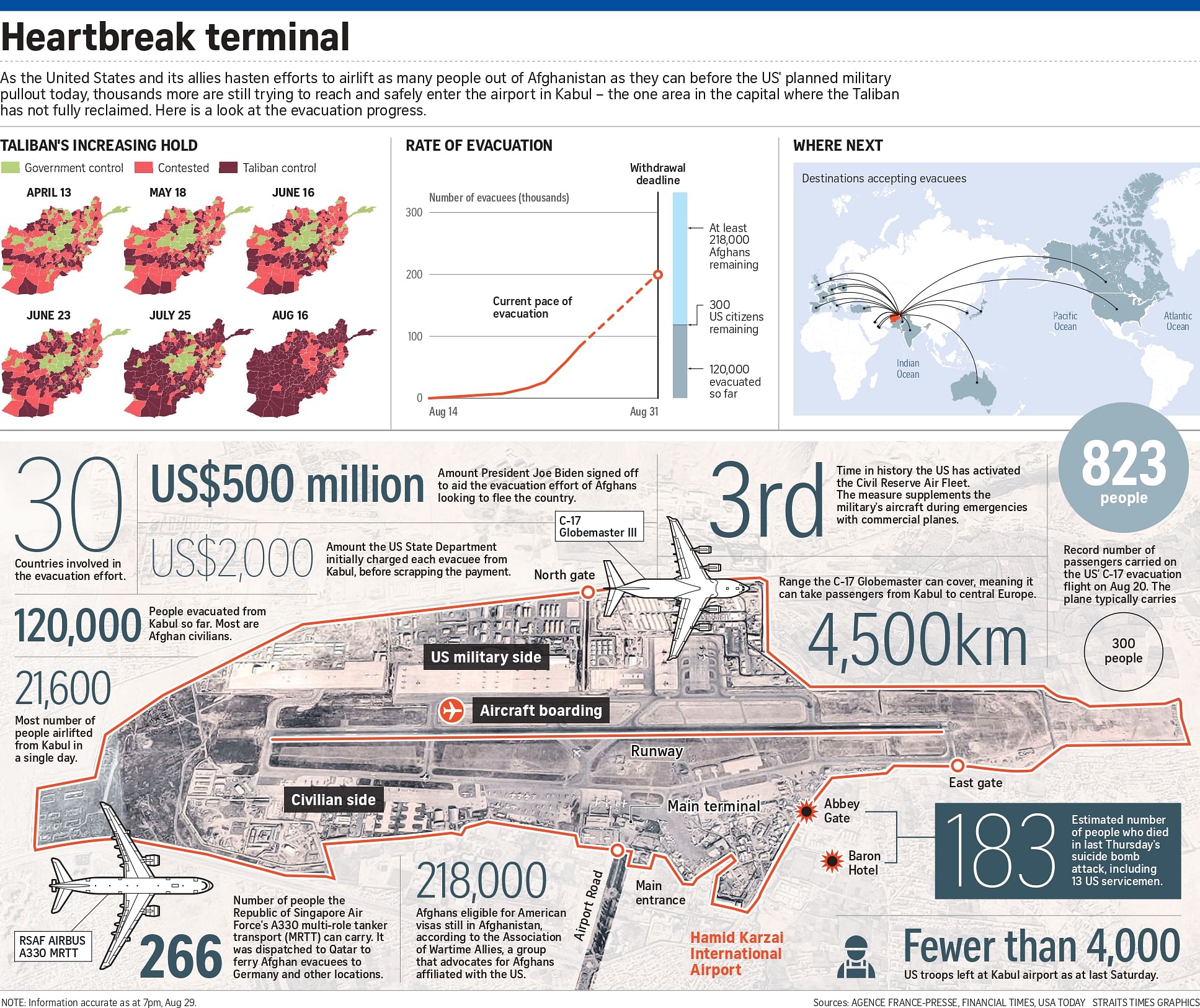 Taleban 2.0: The rebuilding of Afghanistan

'Just give us our money': Taliban push to unlock Afghan funds abroad

UN agency warns millions of Afghans could die of starvation