WASHINGTON (BLOOMBERG) - US President Donald Trump weighed in on the state of trade negotiations with China, saying the United States was "right where we want to be" and on the cusp of taking in massive tariffs from China - at odds with his economic adviser, who conceded on Sunday (May 12) that US companies and consumers would pay the tariff bill.

In a pair of Twitter messages, Mr Trump also refloated a plan from last Friday to redirect money generated by tariffs to buy up American agricultural products and "distribute the food to starving people" around the world - a suggestion that has already drawn scepticism.

Earlier, White House economic director Larry Kudlow said that "both sides will suffer" from the widening US-China trade war, while predicting that the impact on US jobs and growth from higher tariffs assessed on Chinese goods would be "de minimis".

In his first interview since high-level talks between Chinese and American officials broke up last Friday without a deal, Mr Kudlow told Fox News Sunday that China had invited US Trade Representative Robert Lighthizer and Treasury Secretary Steven Mnuchin back to Beijing.

No date has been set so far for fresh talks, he said. It is likely Mr Trump would meet with Chinese President Xi Jinping during the Group of 20 meeting in Osaka, Japan, in late June, Mr Kudlow said.

The ongoing trade fight between the world's two biggest economies is roiling markets and weighing on projections for global growth. The Trump administration last Friday boosted tariffs on US$200 billion (S$273 billion) in Chinese goods to 25 per cent from 10 per cent, and gave Beijing a month to seal a deal or face tariffs on all its exports to the U.S.

Mr Trump said last Saturday that it would be wise for China to "act now" to finish a trade deal with the US, warning of "far worse" terms after what he predicted would be his certain re-election in 2020.

"I think Trump is right. I think they're trying to wait him out," Senator Lindsey Graham, a South Carolina Republican, said in an interview on Fox News' Sunday Morning Futures. Mr Graham called the talks "the best chance of my lifetime to get China to change their cheating ways". 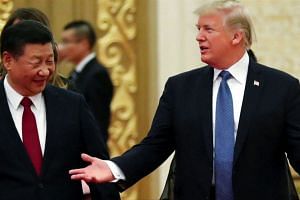 "We're going to have some short-term pain in America to get China to change their behavior," Mr Graham said.

Chinese Vice-Premier Liu He said after talks ended in Washington that in order to reach an agreement, the US must remove all extra tariffs, set targets for Chinese purchases of goods in line with real demand, and ensure that the text of the deal is "balanced" to ensure the "dignity" of both nations. Mr Liu's conditions underscore the work still to be done.

Republican Senator Rand Paul of Kentucky said while Mr Trump may feel he cannot back down from China right now and there would be benefits from a trade deal, he has advised the administration to get a deal quickly because a protracted fight poses risks to the US economy.

"The longer we're involved in a tariff battle or a trade war, the better chance there is that we could actually enter into a recession," Mr Paul said on ABC's This Week on Sunday.

China has vowed retaliation for the higher US tariffs but hadn't announced any details by Sunday morning in Beijing. The People's Daily, the flagship newspaper of China's Communist Party, blamed the US, which it said should take full responsibility for setbacks in the talks.

China "is willing to reach a deal" on trade but will never make concessions on issues of principle, nor trade its core interests, according to the Global Times, an affiliated English-language newspaper.

Mr Kudlow conceded that US importers and consumers, not China, pay the tariffs imposed by Washington on imported goods. But he said China feels the impact, too, in terms of a hit to its own economic growth.

"Both sides will suffer" the impact of the tariffs, he said. "The Chinese will suffer GDP losses and so forth with respect to a diminishing export market."

While Mr Trump has said repeatedly that tariffs are somehow being billed to or paid by China, economists say that is misleading. US importers are responsible for the duties, and ultimately US businesses and consumers pay through higher costs, they say.

A study published in March by economists from the Federal Reserve Bank of New York, Princeton University and Columbia University concluded that the tariff revenue being collected by the US is "insufficient to compensate the losses being born by the consumers". Those costs will rise further if additional Chinese products become subject to an import tariff. Among the products that could be swept into the mix would be mobile phones and laptops, video game consoles, an array of children's toys and flat panel TVs.

Former Treasury secretary Henry Paulson, in an interview on CBS' Face the Nation, dismissed the idea that the trade war would be a positive for the US.

"I don't like tariffs. Why don't I like them? Because they're a tax on the American consumer," Mr Paulson said. "But I see an even more perverse effect with tariffs. Those who do us the great honour of investing in America, of doing business with our companies and suppliers, do so because we've always had predictable, reliable economic policies. Tariffs jeopardise that."

Mr Kudlow said that losing some US jobs and taking a hit to growth was a reasonable trade-off to correct "decades" of unfair practices by Beijing, especially since the US economy is strong.

He said that estimates of the hit to US growth and the employment market from the current tariff regime were "wildly exaggerated", compared with internal White House estimates.

"If you go the whole boat, US$200 billion increase from 10 to 25 per cent, plus the other US$300 billion, we reckon it would be about two tenths of 1 per cent of GDP, so it's a very modest number," said Mr Kudlow. Job losses would be "way, way below" estimates of one million to two million suggested by Fox anchor Chris Wallace, he added.

"You gotta do what you gotta do," said Mr Kudlow. "This is worthwhile doing."

Mr Lighthizer said the administration would release details of its plans for tariffs on roughly US$300 billion in imports from China on Monday. Mr Kudlow said on Sunday that it could be "months" before more tariffs go into effect.