WASHINGTON (AFP) - Early 2020 presidential candidate Kamala Harris introduced herself to American voters on Monday (Jan 28) by drawing a sharp contrast with Donald Trump, offering a robust defence of her progressive positions a day after formally declaring her White House bid.

By launching her campaign a year before any primary votes are cast, the Democratic senator from California leapfrogs several party luminaries waiting in the wings, and a few already in the race, to become the de facto front runner.

It is a burgeoning field that may ultimately feature dozens of candidates seeking to oust President Trump.

Harris immediately took her campaign to Iowa, the state that votes first in the nominating process, holding a televised town hall from Des Moines where she eviscerated the Trump administration for "lighting that fire" of racial division and seeking to "vilify" young immigrants.

"There is a lot of work to do," she told a crowd at Drake University, deftly handling questions from health care to criminal justice reform to gun safety to the war in Afghanistan.

A crowd of more than 20,000 watched her kick off her campaign on Sunday in Oakland, California. But her prime-time town hall brought her into the living rooms of many more Americans.

Complicating the launch, billionaire former Starbucks chief executive Howard Schultz said hours after her announcement that he is seriously considering entering the race - as an independent.

The self-described "lifelong Democrat" told CBS news show 60 Minutes that he will run as a "centrist independent outside of the two-party system". Not only is Trump unqualified to be president, Schultz said, but Republicans and Democrats are failing the American people by engaging daily in "revenge politics". Schultz's announcement drew sharp rebukes from Democrats, who warned he would siphon off Democratic votes and clear Trump's path to re-election.

"I urge him, for the good of the country, to reconsider this bad idea," tweeted House Democrat Brendan Boyle. 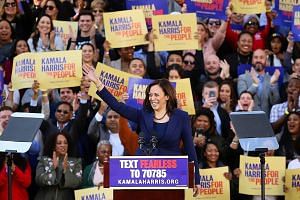 Senator launches bid to be US' first black female president

Trump, clearly aware that a Schultz run could help the sitting president, appeared to seek to goad him into the race, declaring the coffee king "doesn't have the 'guts' to run for President!" But another billionaire businessman, former New York mayor Michael Bloomberg, strongly urged Schultz to halt his independent antics.

"In 2020, the great likelihood is that an independent would just split the anti-Trump vote and end up re-electing the president," said Bloomberg, who himself considered an independent run three years ago but ultimately backed off.

Schultz, at a book signing in New York, stressed he was not aiming to split the Democratic vote.

"I am not running against the Democrats," although the party has shifted "far, far left", Schultz said, insisting "nobody" wants to see Trump out of office more than he does.

The compelling Oakland speech and follow-up town hall was a double-barrelled show of strength by Harris and most likely a calculated shot across the bow to those still on the 2020 sidelines, notably the four Bs mulling a run: Joe Biden, Bernie Sanders, Cory Booker and Beto O'Rourke.

Harris, a former state attorney-general, said her platform will include several progressive policies like debt-free college, a "green new deal" addressing climate change and "Medicare for all", which would allow Americans to opt into government-run health coverage.

Harris rarely mentioned Trump by name, but he was clearly a target.

She said projecting presidential authority "means speaking with integrity (and) speaking truth, and speaking in a way that expresses and indicates some level of interest and concern in people other than oneself." On immigration, she blasted Trump's "inhumane" policy that has led to child separations at the border, and said he has failed young immigrants who were brought to the country as children.

"They're serving in our military, they are living productive lives, and this administration has decided to vilify them and to trade on them for the sake of this president's medieval vanity project called a wall," she said.

Harris's father is from Jamaica and her mother is Indian.

One distinct advantage for Harris is the shift that her home state has made in the primary calendar.

For years, California - the nation's most populous state - voted near the end of the process, meaning nominees were often decided before a single Californian cast a vote.

But the state has moved its primary forward to March 3, 2020, which would give the Golden State a dramatically more powerful say in determining the nominee.