WASHINGTON (REUTERS) - The judge in the trial of US President Donald Trump's former campaign chairman Paul Manafort expressed contrition on Thursday (Aug 9) to jurors for harsh commentary directed at prosecutors.

"I may have made a mistake. It has nothing to do with your consideration in this case," US District Judge T.S. Ellis said as the trial went into its eighth day in federal court in Alexandria, Virginia.

Ellis has repeatedly prodded prosecutors to move swiftly while seemingly giving Manafort's defense team more latitude. He also has repeatedly made comments that some legal experts said may prejudice the jury against the prosecution.

Manafort has pleaded not guilty to 18 counts of bank fraud, tax fraud and failing to disclose foreign bank accounts. He is the first person to be tried on charges brought by Special Counsel Robert Mueller's investigation into Russian interference in the 2016 US election.

On Thursday, prosecutors in a legal filing asked the judge to correct some statements he had made on Wednesday (Aug 8).

Ellis had chastised the prosecution for allowing IRS agent Michael Welch to be present during court proceedings before taking his turn to testify.

Ellis has said he did not like having witnesses listen to the proceedings before they take the stand but the prosecution had previously requested case agents and experts be allowed. The prosecutors on Wednesday said Ellis had approved having them sit in, but the judge screamed at the lawyers in front of the jury, "Don't ever do that again." 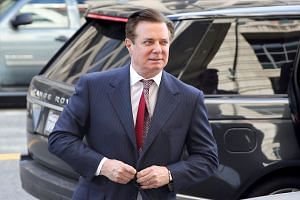 On Thursday morning, Mueller's team requested that Ellis issue a "curative instruction" to the jury, saying he has"mistakenly faulted" the prosecution. In a filing to the court, prosecutors said that on the first day of the trial, they had told Ellis that Welch would remain in the courtroom, and he had not objected then.