WASHINGTON (WASHINGTON POST) - Representative John Ratcliffe, United States President Donald Trump's pick to serve as the next director of national intelligence, has made his name in Congress as one of the GOP's most dogged critics of perceived anti-Trump bias at the FBI and in the special counsel's investigation of his alleged Russia ties.

Mr Ratcliffe, who was first elected to the House in 2014, sits on the powerful House Judiciary and Intelligence committees, both of which are investigating Mr Trump for alleged financial crimes, foreign collusion and obstruction of justice.

It is from that perch that Mr Ratcliffe last week steered one of the more memorable Republican exchanges with former special counsel Robert Mueller during public hearings, accusing him of violating "every principle in the most sacred of traditions" of prosecutors by writing "180 pages about decisions that weren't reached, about potential crimes that weren't charged or decided".

Mr Ratcliffe argued that Mr Mueller had no right to say that he never exonerated Mr Trump, because the President should have been presumed innocent until proved guilty.

"Donald Trump is not above the law. He's not. But he damn sure shouldn't be below the law, which is where Volume 2 of this report puts him," Mr Ratcliffe said.

That turn in the spotlight appears to have solidified a positive impression on the President, who on Sunday (July 28) tweeted that Mr Ratcliffe "will lead and inspire greatness for the country he loves" as the next director for national intelligence.

But first, Mr Ratcliffe must be confirmed by the Senate, where leading Democrats accused him of being Mr Trump's top pick because of his efforts to please the President.

"It's clear that Rep Ratcliffe was selected because he exhibited blind loyalty to President Trump with his demagogic questioning of former special counsel Robert S. Mueller III," Senate Minority Leader Charles Schumer said in a statement.

"If Senate Republicans elevate such a partisan player to a position that requires intelligence expertise and non-partisanship, it would be a big mistake." 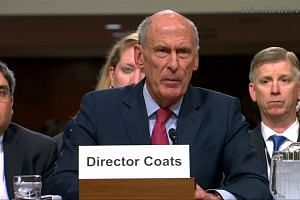 A spokesman for Mr Ratcliffe did not return a request for comment late on Sunday.

Mr Ratcliffe, a congressman for Texas, represents the seventh-most Republican district in the country, according to the Cook Political Voting Index, and trumpets his conservative voting record and his ties to Mr Trump far more than the current director of national intelligence, Mr Daniel Coats, whose differences with Mr Trump over his approach to adversaries such as Russia have often played out in public.

Mr Coats, a Republican who was a longtime senator and congressman from Indiana before joining the administration, frequently won accolades from Democrats for being willing to contradict the President in the course of doing his job.

"The mission of the intelligence community is to speak truth to power. As DNI, Daniel Coats stayed true to that mission," Senator Mark Warner, the ranking Democrat on the Senate Intelligence Committee, tweeted on Sunday.

Mr Ratcliffe has not denied that Russians interfered in the 2016 US presidential campaign. And before Mr Trump came along, he, too, was allied with more classic Republican conservatives, serving as an aide to former presidential candidate and current Senator Mitt Romney during his presidential campaign, helping scout potential Cabinet picks.

Yet in recent years, Mr Ratcliffe has been one of the GOP's leading voices alleging that bias at the FBI corrupted investigations of Mr Trump's alleged Russia ties and Mrs Hillary Clinton's use of a private e-mail server while she was secretary of state. He also has alleged to Mr Mueller that although Russian meddling is a serious matter, it may have benefitted Mrs Clinton more than Mr Trump.

Mr Mueller isn't the first senior federal official Mr Ratcliffe has accused of running an investigation biased against the President. Even before Mr Trump was elected, he did the same with then FBI Director James Comey, criticising him in September 2016 for allowing Mrs Clinton's lawyers to be present for her interview during the bureau's investigation of her use of the private e-mail server.

Mr Ratcliffe, who briefly served as US attorney for the Eastern District of Texas under president George W. Bush, and worked as the office's chief of anti-terrorism and national security, was at the time involved in the GOP-led congressional investigations of the FBI's Trump and Clinton inquiries as a member of the Judiciary Committee.

He joined the House Intelligence Committee earlier this year, where he has been considered the GOP's replacement for former congressman Trey Gowdy, an accomplished prosecutor skilled in executing detailed, stinging examinations of witnesses in closed-door interviews and from the dais.

In the past several months, Mr Ratcliffe has endorsed investigations of the origins of the Trump inquiry, presently being run by Mr Barr and Justice Department Inspector General Michael Horowitz, as a means of exposing alleged bias at the FBI, which Mr Ratcliffe thinks wrongly used its surveillance authority against members of the Trump campaign based on faulty, Democratic-funded information.

On Sunday, hours before Mr Trump announced his nomination, Mr Ratcliffe declared a political victory for the President and defeat for the Democrats, who he said "overplayed their hand".

"It was just a train wreck of a week for the Democrats, and it was a great week for Donald Trump because of that," Mr Ratcliffe said on the Fox Business Network's Sunday Morning Futures, opining that House Judiciary Committee Chairman Jerrold Nadler and House Intelligence Committee Chairman Adam Schiff were "starting to look more like Laurel and Hardy" for continuing to investigate the President.

On Sunday, Mr Schiff tweeted his thanks to outgoing spy chief Coats for serving "with such distinction", adding that "he has had the independence and strength to speak truth to power". He did not comment publicly on Mr Ratcliffe's nomination.