WASHINGTON (AFP) - Democratic front runner Joe Biden said on Thursday (Aug 1) that he was "surprised" at the intensity of debate-night criticism levelled at his one-time boss Barack Obama, saying the popular former president has nothing to apologise for.

"I must tell you, I was a little surprised at how much the incoming was about Barack," Mr Biden told reporters the morning after a debate in which the former vice-president clashed with rivals on multiple issues, including deportation policy when he and Mr Obama were in the White House.

"I'm proud of having served with him, I'm proud of the job he did. I don't think there's anything he has to apologise for," Mr Biden told reporters in Detroit.

Mr Biden throughout his campaign has highlighted his partnership with America's first black president, in part to woo African-American voters and progressive Democrats.

But with the party shifting leftward in recent years, Mr Obama's immigration policies came under scrutiny at Wednesday's debate, with some Democrats taking issue with the number of deportations that occurred during his tenure.

Candidate Julian Castro, who served as Mr Obama's housing secretary, criticised the then president's immigration policies as a way to confront Mr Biden.

During the debate, Mr Biden said he would "absolutely not" bring the deportation rate back up to what it was during Mr Obama's first two years in office, but when pressed, he declined to say whether he advised Mr Obama to slow the deportations. 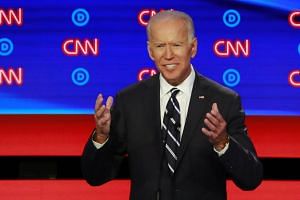 Mr Biden also fired back at other candidates on stage, countering his campaign pledge to not attack other Democrats.

"I responded" to being provoked, Mr Biden said.

Several rivals seized on Mr Biden's long legislative history, criticising his support for a 1994 crime Bill, his vote against expanding a child care tax credit, and his votes supporting an amendment banning federal funds from being used to cover abortions - a position Mr Biden recently reversed.

"There's a lot of things everybody has done in their past, and votes that no longer have a context today," Mr Biden said.

"Some of these assertions being made were absolutely - how can I say it nicely? - not true and taken out of context."