WASHINGTON (AFP) - US Defence Secretary James Mattis on Thursday (Aug 31) denied any divergence of views with Donald Trump over the response to North Korea's recent missile launch, after he appeared to undercut the President's tough rhetoric.

Mattis had argued on Wednesday that there was still room for diplomacy in dealing with Pyongyang's provocative ballistic missile launches, shortly after Trump said negotiations were "not the answer."

"'Diplomatic' can include economic sanctions, United Nations sanctions, it's not just talking. I didn't contradict anything the President said. We're not talking to the North Koreans right now," Mattis told reporters at the Pentagon.

"I agree with the President... We should not be talking right now to a nation that's firing missiles over the top of Japan, an ally," he added.

"We're working diplomatically with Secretary (of State Rex) Tillerson in the lead, and I maintain behind that military options for the President, to back up the diplomacy. But we're not done with diplomacy." 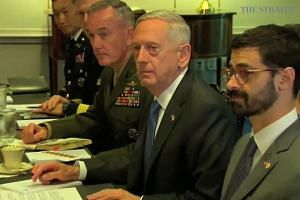 Mattis called Pyongyang's test launch of an intermediate range ballistic missile over Hokkaido on Tuesday a "reckless and provocative act," but suggested that US and Japanese forces almost immediately knew the missile, which landed far out into the Pacific Ocean, was not targeted at anyone.

"We knew within minutes where it was going," he said.

The Pentagon chief declined to confirm reports that North Korea could be preparing a new nuclear test, which would be widely seen as another provocative and dangerous move by the Pyongyang regime.

However, he added, "they could do something like that on relatively short notice."