SOUSSA, SYRIA (AFP) – US-backed forces pressed an offensive against the Islamic State in Iraq and Syria (ISIS) group in its last redoubt in Syria on Thursday (March 21), denying reports the extremist enclave had fallen.

“Mopping up operations continue in Baghouz camp,” the command of the Syrian Democratic Forces (SDF) said in a brief statement.

The SDF, which launched a final assault against the village of Baghouz in eastern Syria on Feb 9, denied reports that the ISIS enclave had completely fallen to its forces.

An AFP team on the ground saw trucks carrying people out of Baghouz on Wednesday night.  Thousands of people have fled the besieged ISIS pocket in recent weeks and turned themselves in.

Since January, some 67,000 people have left the enclave, including 5,000 militants who surrendered, according to the SDF.

On Tuesday the advancing Kurdish-led SDF announced its forces had driven diehard fighters out of the main encampment where they had been confined in recent days.

“This is not a victory announcement, but a significant progress in the fight against Daesh,” SDF spokesman Mustefa Bali said, using an Arabic acronym for ISIS.

US President Donald Trump on Wednesday praised the progress of the fight against ISIS since he came to power, saying the fall of their self-proclaimed “caliphate” was imminent. 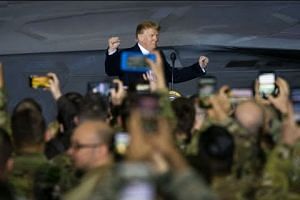 “The caliphate is gone as of tonight,” Trump said at a military tank factory in Lima, Ohio.

The US president has signalled the group’s imminent demise on several previous occasions, although ISIS has yet to wave the white flag of surrender.

Trump, who announced in December the withdrawal of some 2,000 US troops who had been deployed in Syria, said about 400 of them would remain on the ground “for a period of time”.

ISIS declared a “caliphate” in June 2014 across territory it seized in Iraq and Syria.  The loss of the Baghouz enclave would signal the demise of the “caliphate” in Syria, after its defeat in Iraq in 2017.

But ISIS has already begun its transformation into a guerilla organisation, and still carries out deadly hit-and-run attacks from desert or mountain hideouts.

Syria’s war has killed more than 370,000 people and displaced millions since it began with the repression of anti-government protests in 2011.